Talker’s Block? I Don’t Think So

Imagine this. We’re friends, sitting on my balcony, enjoying the sailboats on the horizon across Lake Michigan. (It might take a minute to get the image, especially since the aforementioned balcony doesn’t exist.) We’re drinking our favorite beverage and discussing what’s new, what’s news, and what’s interesting recent history.

You’re speaking about how you see the world. I hear a thought you share, and it prompts one of my own. You listen and elaborate on what you meant. I sip my wine and then I say,

“Um, I have nothing to say. I’m suffering talker’s block.”

I don’t think so.

Conversation as a Cure for Writer’s Block

Ever heard anyone say that they have talker’s block? Sure everyone has moments when we have nothing to say or no comeback, but do we get brainlessly blank when we’re talking to our friends? Do we sit around watching the Superbowl, listening to a debate, or seeing someone Twitter on a new iPhone . . . then find ourselves without word one? No, of course not.

Conversation is a participation sport that has only one team. In a conversation, people share ideas in a relational, flexible way. Whether they’re “Oh yeah, I know what you mean!” discussions or “You’re totally missing the point!” debates, conversations work the same. Conversations have three key elements in common that work in this way.

When we add to a conversation, we draw from what we know, what we’ve experienced, what we imagine, and what we wonder about. We do that in response to thoughts that other folks have shared.

Here’s the bit not to miss . . . we draw from the same places — what we know, what we’ve experienced, what we imagine, and what we wonder about — when we start a conversation.

When we’re conversing with friends . . . we don’t edit our thoughts or tie them up like a presentation. We put the focus on who we’re talking to and what they’re saying, not on how they’ll be looking at us. We trust our friends to hear what we’re saying or ask when they can’t. We make room for feedback, so that we know. We respect their thoughts.

Want to how to cure writer’s block?

I just told you.

If you’re feeling blank, draw from what you know, what you’ve experienced, what you imagine, and what you wonder about. Put an idea or observation out there. Focus on who you’re talking to and leave room for feedback. In print or on the Internet, write a conversation.

I started the engine. Here’s the keys. Your turn to drive.

–ME “Liz” Strauss
Want to get rid of your writer’s block forever? I’ll show you how.

Which Conversations Are Important Too!

In the world of business, it takes an action to make something happen. Watching rarely gets anything done. A conversation is a great place to make things happen. Yet, many of us seem to be missing out.

Where do you fit in the conversation? Are you a lurker, a listener, or a participant? 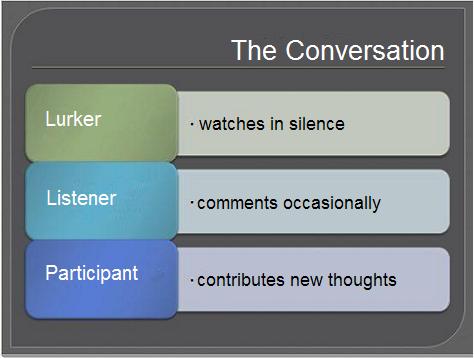 If you’re a lurker, you’re getting the value of the information.

If you’re a listener, you’re also finding out who knows what and who’s a pretender. Listeners soon find out who’s connected to whom.

If you’re a participant, you’re making an impression. People are also finding out about you.

But this is only stage one.

Where the conversation occurs makes a difference. Are you only talking to the people you already know? When you move into a new network do you move down to the level of a lurker? I know that I used to do just that. Then I realized something important.

If we only talk to the same group of people, we’ll always be in that same group talking about the same things on and on.

Want to know, want to grow? You need to expand where you have your conversations. 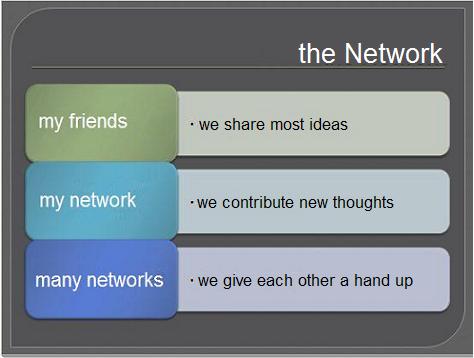 In our circle of friends, we usually agree on the same ideas.

When we move out to a network of colleagues and acquaintances, we can share in new ideas and new thoughts.

If we want to move up and out, if we want to grow and become more, we have to get to know the folks who know what we need to know. That means reaching out of our personal network to explore many more networks — the networks to which those people belong — and letting those who need a hand up into our own.

Ask a blogger why he or she started blogging and it’s likely you’ll hear that it had to do with sharing a wealth of knowledge and finding an audience to teach. I enjoyed a conversation last night with a blogger who had been blogging for 5 years and she told me that she started for every same reasons. It’s information sharing that gets us here. But it’s the conversation with real people that keeps us engaged and building communities — for our businesses and as part of our lives.

Though we participate in the conversations on our blogs and others, two of our own Successful and Outstanding Bloggers were extending the conversation to the folks who don’t necessarily do that.

Have you met Leah Jones and Jeremiah Owyang? 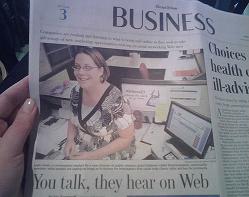 Look there’s Leah Jones, above the fold on the front page of the Business Section of the Chicago Tribune!

Leah Jones, Conversation Analyst for Edelman in Chicago and Jeremiah Owyang, Senior Analyst for Social Computing at Forrester Research were featured in a piece called, “You talk, they hear on web.” by Tribune staff reporter, Eric Benderoff.

Here’s a virtual article base on what these two prominent bloggers had to say. The questions are mine. The answers are from the article text. [Please note: These quotes are presented dynamically with an eye to maintaining the speakers’ original intent, despite this new context. My hope is to offer a closer glimpse of the blogger behind the words. The original, must-read article carries the full story.]

Leah, what does a conversation analyst really do?

“I pay attention to what people say online,” said Leah Jones. . . “My job is research and education,” Jones said. “I do a lot of small group training on social media.”

So, do you talk as well as listen?

“To get a true sense of what people are saying on blogs or in forums, we don’t get involved in the conversations,” Jones said. . . . “If I e-mail a blogger, I tell them ‘I’m Leah, I work at Edelman and I’m writing you because … ,’ ” she said.

So what are you looking to do with and for your clients?

“When we look at 2008, we’re asking, ‘What’s our news? What’s our online strategy? What are our conversation strategies?'” Jones said.

“If you have a social media strategy, you need the right people,” said Jeremiah Owyang.

Why did you say 2008 will be an important year for social media?

“For the first time, you will start to see budgets set aside for social media strategies and processes,” he said. . . . Later he added that “As customers get more involved, expect their feedback to shape new products.”

Both of these bloggers are genuine and engaging conversationalists, who set aside their own thoughts to listen in to what we are saying, to learn where the conversation will go.

Leah and Jeremiah, you are B.A.D. Bloggers! Thanks for taking the conversation to the world of print.

Who Am I Talking to?

I’ve been thinking about this a lot.

I’ve been listening to when I say,
“You have to understand.”

I’ve been listening to when other people say that sentence too. 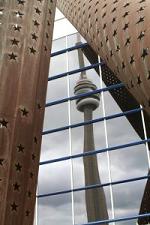 Truth is, no one “has to” understand anything anyone says anytime anyplace at all.

Yet, even more amazing is that often when the sentence, “You have to understand,” is being said,
the listener does understand.

Often the listener understands
better than the speaker does.

I’ve been listening to when I say,
“You have to understand.”

Maybe the person I’m trying to convince is myself.

I fight the hardest to convince other folks what I need to believe most myself.

I wonder if I understand myself, will I quit telling other folks that they have to understand what I’m saying?

You have to understand. I’ve been thinking about this a lot.

Well, no you don’t. No one does.
We don’t have to understand each other . . . but it works better when we do.

Maybe we start by listening to and understanding ourselves.