This work reminds me every time I see it of what delight can be provided by a combination of creative imagination and skill with materials. When you look at the pieces in this composition up close, they are basically a set of bent and twisted square metal rods with a small flat metal piece bolted on at the tip of each. When you stand back and allow your imagination to take over, they are birds. Magic!

What magic are you creating, or seeing, today?.

Today, on our regular Sunday visit to the beautifully pristine Fingal Beach, we noticed for the first time in the beachside park area this striking wooden sculpture of an echidna. The carving is of one piece with the supporting block, but there is no plaque or other indicator of who the artist is. 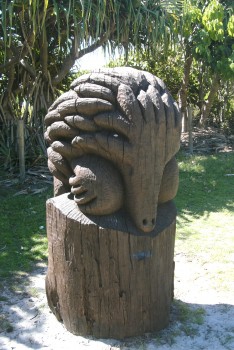 The echidna, also known as a spiny anteater, is â with the platypus â one of only two egg-laying mammals. It is found only in Australia and New Guinea (Indonesian provinces of Papua and West Papua, and the independent nation of Papua New Guinea). Despite its popular name and the fact that ants form part of its diet, the âspiny anteaterâ is apparently not particularly related to the true anteaters of the Americas.

Would we have discovered this echidna sculpture sooner if the story of the art and the artist were there for people to share?

Australian brush turkeys, also called scrub or bush turkeys. The male is building the hollowed mound nest from leaves, other combustible material and earth. Typically more than one female will lay eggs there and the male then tends the nest for the next seven weeks till hatching. He checks the temperature regularly with his bill, then taking bits out or adding, to manage the temperature in a range of 33-38 degrees C (91-100 F). They look cute enough, but create a lot of mess along the beach walkways and if they nest near backyard gardens are known to acquire the gardeners’ mulch for their nests. Which may help to explain why they are listed on one site as one of a group of Australian âbirds behaving badly.” 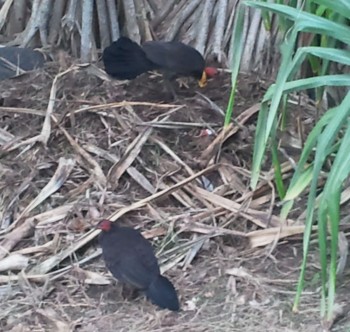 Hope your weekend doesn’t leave you thinking that brush turkeys have been around.

Right now on my healing journey I have been givine lots of time and space for reflection. The beach is my favorite place to just sit and be still. I find the calmness of the sea and the ever changing patterns that nature provides is the perfect place for me to just be. – Suzie 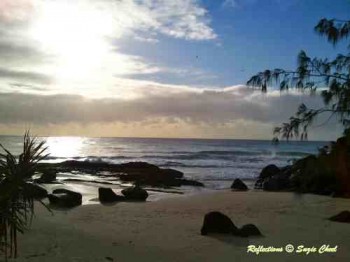 Do you have a quiet space where when you need to recharge or just take time out that you go? 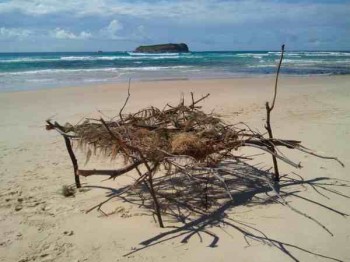 From a distance it looked like someone had built a bed or a shelter.
On closer inspection it proved to be a complex structure.
Or more beach art?
This was taken at Fingal Head Beach looking out towards Cook Island

What do you see?

At this time of the year it’s a common occurrence for us to see one or more whales just offshore from our local beaches, on their annual migration north. Occasionally we are lucky enough to see one breaching. The picture is of one of the sculptures in the 2008 Swell sculpture festival â an annual event – at Currumbin Beach, about 15 minutes from where we live. âHelidon Breachâ, the title of the work by Matthew Bath, references both the magnificent sight of a whale breaching and the source of the beautiful white Australian sandstone from Helidon, Queensland.