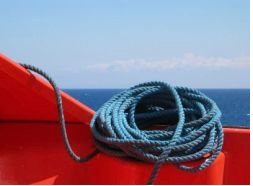 Very early in my career (I emphasize âvery earlyâ as this is not an incident I am proudÂ of and didnât want you to think this was last week!).

I was in a sales training session and we had to do a lifeboat exercise.

You are probably familiar with this.

You imagine you are lost at sea in a lifeboat with others, and you have set of items in your emergency kit.
But you canât keep them all, and you need to decide which few items to keep (while you pursue or await rescue) and which to throw overboard.Â  Itâs stuff like a flare, a rope, a mirror, a flashlight, food, a compass, drinking water, matches, etc.

The way the exercise goes is that you first create your list of must-keep items individually, and then you discuss it as a team and build a team-generated list.

This is an exercise where there are, in fact, correct answers, so you get a score on how well you did as an individual, and as a team.
The point of the exercise is to show how no individual scores come out higher than the team score, and to demonstrate the value of teamwork.

OK, So our team was pathetic.

This was an international meeting, and on our team we had 7 English-as-a-first-language people, and one French guy.Â  Although he spoke English, (loads better than any one of us spoke French!), the language issue was difficult and distracting to the team.

Every time he advocated for his choices we basically ignored him because it was just too slow and difficult to get what he was saying, and it didnât sound that smart to us anyway.

You can guess the outcome here

1) Our team not only lost, but failed spectacularly, in an unprecedented wayâ¦?2) Our team score was lower than ALL of our individual scoresâ¦?3) AND the French guy not only had the highest individual score on our team, but of all the individuals, and all the teams!

OK, so what are the lessons?

He was the smartest guy in the room.Â  He tried to share his good ideas with us â over and over again.Â  We basically threw him overboard.

So for me, although miles from the lesson intended about teamwork, this provided a good slap in the face, and some real lessons about communicating.

I think about this tragically âAmericanâ moment in my career very often when I am working internationally.Â  And it serves as a reminder to be a better human!

1. Modify your expectations of communicating

When there is a language issue, treat is as YOUR issue.

They are speaking your language as a favor to you.Â  You donât speak THEIR language.Â Â So remember you are putting the other person in a difficult position.

If you have never tried â just try to learn another language.Â  Appreciate the great chasm that you would need to cross to speak as well in your colleagueâs language as they do in yours.

Donât just accept a weak meeting outcome, and blame it on the other person.

Take responsibility to get the necessary business outcome and give the person a chance to communicate on their terms.Â  Itâs up to you to make sure you get their best thinking.

2. Donât equate capability with ability to speak your language

I recall from one of Jack Welchâs books that even he made this mistake when he first started hiring people in Japan.Â  He hired the Japanese people that spoke English best because they seemed more capable to him.

He later let native Japanese leaders choose talent in Japan and got much better hires.

If something is critical, let people work in their native language and make it your problem to process and understand it.

Writing can be much easier to understand because both parties get to communicate at their own pace.Â  Nothing gets lost as the conversation goes by.

I have had meetings where we literally wrote out, in sentences, our conversation, decisions and agreements on the white board.
The discussion moves slower, but the communication moves much faster.Â  Writing can often be much more easily understood than talking, and it is very easily translated.

Use writing in parallel with social media
I also heard a brilliant idea from a colleague who manages an international team.Â

On all of their multi-country conference calls they use an additional IM window where people in each country type out the key points being made, translate any jargon, highlight questions and decisions, and clarify areas in the discussion that were moving fast, or unclear.

They alsoÂ use blog updates which capture the key ideas and decisions from the conference call in writing, to re-inforce the keyÂ outcomes and have a record forÂ later review and understanding.

This improved both productivity and relationships dramatically.Â  Brilliant!

How do you communicate with global teams?

Please leave your ideas in the comment box below!

—–
Patty Azzarello is an executive, author, speaker and CEO-advisor. She works with executives where leadership and business challenges meet. Patty has held leadership roles in General Management, Marketing, Software Product Development and Sales, and has been successful in running large and small businesses. She writes at Patty Azzarello’s Business Leadership Blog. You’ll find her on Twitter as @PattyAzzarello. Also, check out her new book Rise…