From Heathrow to Edinburgh to City U 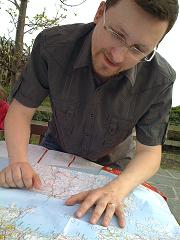 My son and I landed at Heathrow on Saturday the 10th. The first part of our journey was by car up to Edinburgh to visit with Joanna Young. On the way, we had a meal with Chris Garrett and his family at a pub called the Red Kite in Wakefield. He sent us up to York for the night.

The next day we traveled on to Edinburgh to meet up with Joanna Young and Amy Palko. Amy left us after a few hours. Joanna housed us, fed us, and educated us as if we were family. Wow! Joanna drove us to the airport Monday evening. She’s now moving far away . . . hmmm.

Tuesday is when business began. We got to the renown Journalism School of City U, signed in, went to the office to stow our stuff. We watched through a doorway as our host, Mary Ann Kernan, worked with masters degree publishing students. She spotted us and made us comfortable as she finished up. Immediately my son and I pulled out our gadgets — my iPhone, his palm — to check for wifi. NONE. We’d been looking to jump online since we’d gotten to that part of the world . . . Joanna’s house had been the only haven.

Mary Ann took us the lounge where we met Adrian Monck, Head of the Journalism School, past investigative reporter, and blogger, who was that day finishing a move of his blog from blogspot to WordPress. You might enjoy this piece he wrote for the Guardian on whether the media can be trusted.

We headed over to the Bayes Business School — a beautiful building with a wall of corporate partnerships proudly displayed behind reception. Limited wifi — in the library for students and guests with laptops only. No luck for the Strauss family travelers looking to connect with you and others.

The event began with informal networking outside a 21st Century classroom — well, 21st Century, except for the wifi thing. Then it settled into an interview / conversation on how City U might respond to the social opportunities of the Web. The format was much like the TV show Actor’s Studio and all was caught on video. The interviewer was the distinguished Director of the Cass Learning Laboratory, Clive Holtham. I was the interviewee. The audience included Adrian Monck, Mary Ann Kernan, Susannah Quinsee, Head of Learning and Development, senior staff and professors, my son, and students from both schools.

The university seems to be particularly concerned with “blogs” rather than “social media.” The blogs I saw and heard about were mostly used for reflection and to extend or supplement teaching. We had some discussion about how to encourage conversation, community, and interaction. One professor came in prepared to be disappointed and was glad he wasn’t. One journalism professor was heartened to hear that bloggers were gaining stature. AND Adrian Monck signed on to Twitter during the session. How cool is that?!!

The best question of the day was: What is a blog’s competition?

How would you answer that one?

More to come about what’s going on at UK universities.