Corporate joy? Is that an oxymoron?

It doesn’t have to be, according to Richard Sheridan. His company, Menlo Innovations, is devoted to “ending human suffering in the world as it relates to technologyÂ.”

Sheridan’s book, Joy, Inc., (which was originally released in 2013), is a fascinating look inside his team’s “joy factory.” 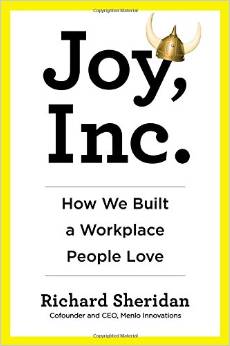 The casual reader might be tempted to approach this book with some healthy skepticism. The title conjures up a mental image conjured of a bunch of forced-wacky Kool-Aid drinkers.

In reality, the book provides a detailed explanation of systems, methods, and daily processes that are intended to result in joy. Joy for the employees, for the clients, and for the lucky end-users of the software being created.

Learning and teaching are at the core of the Menlo system, where colleagues work in pairs and progress is quite visibly measured on the walls. Humans need to feel that they are making progress in order to be happy, and that need is systematized at Menlo.

Here are just some of the ways Sheridan and his crew build joy:

Menlo is serious about transparency. The conclusion of the book punctures the idea that it is utopia. There are problems, as there always will be when humans are involved. The key difference is that here, problems are openly acknowledged and tackled as a team, not behind closed doors.

I’d strongly recommend this book to anyone who is considering building a business, and especially those who are already running a business. There are ideas galore, and even if you aren’t producing software, Sheridan challenges you to find the joy in your daily business.

Do you look at joy as a business value?

Disclosure: I was provided a digital review copy of this book. My opinion is from the heart.

Author’s Bio: Rosemary OÂNeill is an insightful spirit who works for Social Strata — makers of the Hoop.la community platform. Check out the Social Strata blog. You can find Rosemary on Google+ and on Twitter as @rhogroupee