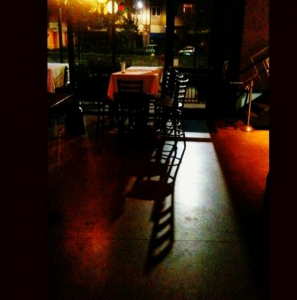 I felt the more embarrassing fear of people’s judgment.

When I decided it was time to write again, I avoided the computer for the longest time. On the rare occasion that I managed to sit myself down to write, I’d get caught up answering email or reading articles around the web, not doing writing I had sat down to do. Some people would call what I felt was writer’s block or procrastination. But those words name the behavior, not its source — fear.

Fear is a silent villain. Until we see it, we can’t make it go.

Once I could speak loud enough to be heard and had the energy to think new thoughts, I found myself on shaky ground — I was afraid that I no longer had a “voice” that is relevant to the world. But I didn’t realize that at first. At first I was lost in overthinking. I felt like a trapeze artist to fly without a net for the first time.

It wasn’t until I finally listened to myself that I found out what the problem was. I was consistently there every time I talked about what held me back. I thought I was stopped by what other people think or do. I was sidetracked before I even got to that by the words I don’t know. . . . Now I was getting somewhere. That was something I could know.

When I recognized my fear, I could consider it rationally rather than trying to rationalize it. I told myself I couldn’t possibly know everything. So what was all of this “I don’t know” fear about? I didn’t fear for my safety or fear getting lost. What feared was what people expected of me. I had faced that fear before. That fear is about fighting with ghosts. No one can win the approval of everyone.

I felt the fear of people’s judgment. Which people? My family? No. My friends? No. My third grade class? The city of Chicago or the entire population of the Internet? The world doesn’t have time to decide whether I do my best?

We have to find our true value by deciding for ourselves.

Put Your Mind to It

Take a few minutes to think about what you value in yourself. Do you give yourself the credit you’re due?  Decide what you know, what you do, and what you expect from yourself. Live up to that.

More from Liz . . .
about Getting Past Fear:

What Is the Best True Story You Could Tell about You?

Are You Using History Strategically . . . to Claim Your Business and Life Future?