My Father’s Saloon — A Blogging Story

I wrote this story as part of a writing project. 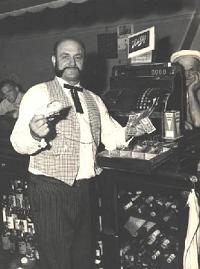 Most daughters are proud of their fathers, as they should be. I won’t try to convince you how outstanding mine was. I’ll just tell that it is so. I learned from him all that I know about generosity, people, life, and business. He was unconditional love.

My dad owned a redneck saloon. Saloon or tavern is what he called it. It opened that day in 1933 that Prohibition was repealed.

His customers were regular people — farmers, businessmen, family folks, factory workers. The bar sat 60 people easily. You could get a draft beer for 50 cents. Every night, you could get pizza. Every Saturday, you could get fried chicken. Every person who went there thought of my father as a personal friend. The matchbook covers said, “You’re only a stranger, but once.”

My dad had a deal with the sheriff and with his customers. Sometimes he’d throw a drunk into jail at 10pm. Then he’d bail him out and take him to breakfast when the saloon closed in the early morning.

One tough guy, named Patrick, was only allowed in the bar one day a year — St. Patrick’s Day. He’d misbehave, get kicked out, and then come back 365 days later. It was their gentlemanly agreement. I don’t know how they came to it. I only know that they did.

Though I wasn’t at the tavern often, I knew the regulars by name. They knew all about me too. How could they not? They had entertained me since I could walk. They had been at my christening on a 40-acre farm. They got free tickets to every dance recital and graduation. Many of them saw me as their daughter. Most still have the calendar with my picture and a thermometer on it. One lady keeps that picture of me in her freezer. An extended family lived at my father’s saloon.

When I got old enough to go to bars, people my age would tell me stories about my dad and buy me drinks in his honor. The toughest guys in town would tell me, “Hey, if you ever need a favor . . .”

Anyone who’s been to Successful Blog knows that I am like my father. I even keep snacks and beverages in the sidebar — a reminder that I am a saloonkeeper’s daughter. That’s how the story relates to my blogging goal.

You see, my father didn’t work at the saloon. He lived it. He also earned enough to feed a family and send three kids to school. Somehow in doing that, he managed to make a difference in people’s lives by sharing what he knew and who he was.

My blogging goal is to do the same thing
with my blog that my father did with his saloon.

Below is a shot of the mockup for the matchbooks that were made for my dad’s saloon. I still have a box of them in my desk within arm’s reach of where I sit.

It was a turning point for this blog when I took up Darren’s Challenge and wrote my blogging goal. From that day forward, every decision I made was easier, faster, and more purposeful. I knew the direction I wanted to go.

People who succeed are directed and “in with both feet.”

We built an online community on conversation. But we’re having most of that conversation with each other . . . and the occasional random folk who join us along the way.

Now it’s time to open up the conversation to the offline world — to reach out and invite them to join in.

Business online is affecting offline business models. At the same time, we’re at risk of ignoring business wisdom collected up to now.

Online and offline businesses have so much to offer each other, yet we don’t compare notes nearly often enough.

As Terry and I build out SOBCon to a yearly conference and a Models and Masterminds business, my blogging goal has grown. I work with businesses, universities, and entrepreneurs who are welcoming their online communities into their culture. I work with individuals who are fitting their jobs to their strengths rather than the other way around.

My blogging goal is to connect the online conversation to offline businesses so that we can work together in a profitable way.

What are you doing to connect your online conversation to people who work offline? Is it time you rewrote your blogging goal?

Drinks and snacks are still available in the sidebar.

Thanks Todd Jordan for the conversation that inspired this post.
–ME “Liz” Strauss
Work with Liz!!
Check out Models and Masterminds too