One night while we were talking, a miscue happened. I’m sure I don’t remember the story as well as I remember the fallout. Messages were sent and received. Feelings were misunderstood and confused. Even after it was sorted, things didn’t feel back to normal.

In a cold, gray next morning, I was still bothered. I went to a convenience store, bought a box of crayons, and walked down the street to a florist. I asked for a small bunch of flowers, and Would they include the crayons in the arrangement?

Okay, so the flower lady looked at me a little funny, but she did what I asked. 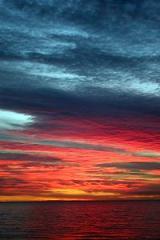 I wrote in the card something like, When the gray Chicago sky sucks, color a new one. and signed it with love.

She called laughing saying that was the best idea.

The most amazing thing happened. One a week, near the train station, my friend found a crayon waiting for her — yellow, blue, green, blue again. I think that was the order.

Suddenly crayons found her. Now my friend has a whole collection of crayons.

Amazing things happen when you make the sky a new color.