Facebook is a very powerful, extremely viral social networking and micro-blogging platform that has catapulted many businesses to new levels. It has enjoyed a famously popular online exposure and an ever-increasing appeal to corporations, social networkers, and online entrepreneurs.

Some companies who recognize the Facebook effect experience enormous brand recognition and success that accompanies their marketing efforts. These six companies are currently enjoying successful social networking, high traffic to their sites, and a branding experience that they credit to Facebook.

The famous potato chip snack company is quite popular on Facebook – something to the tune of over 3 million fans! The site’s attraction is more than the snack lover’s interest in their wares, but for their comedic and crafty use of their product videos.

The videos are a mixture of professional, commercial-style shoots and others that were taped possibly using personal video recorders. All of the videos are entertaining and funny, but without fail in each video, Pringles brands themselves very effectively through visual marketing.

If Facebook fans ever needed a reason to love a computer manufacturer, Dell has given them one – if not several. With over 100,000 fans and several niche Facebook pages, Dell is the company who proudly embraces a green campaign and makes a conservation commitment to their Facebook followers.

Each time one of Dell’s fan’s picks a friend, Dell plants a tree on their behalf. This effort is a part of their commitment to creating a healthier planet, additionally making a donation to The Conservation Fund to plant up to 150,000 trees. How’s that for social interaction? 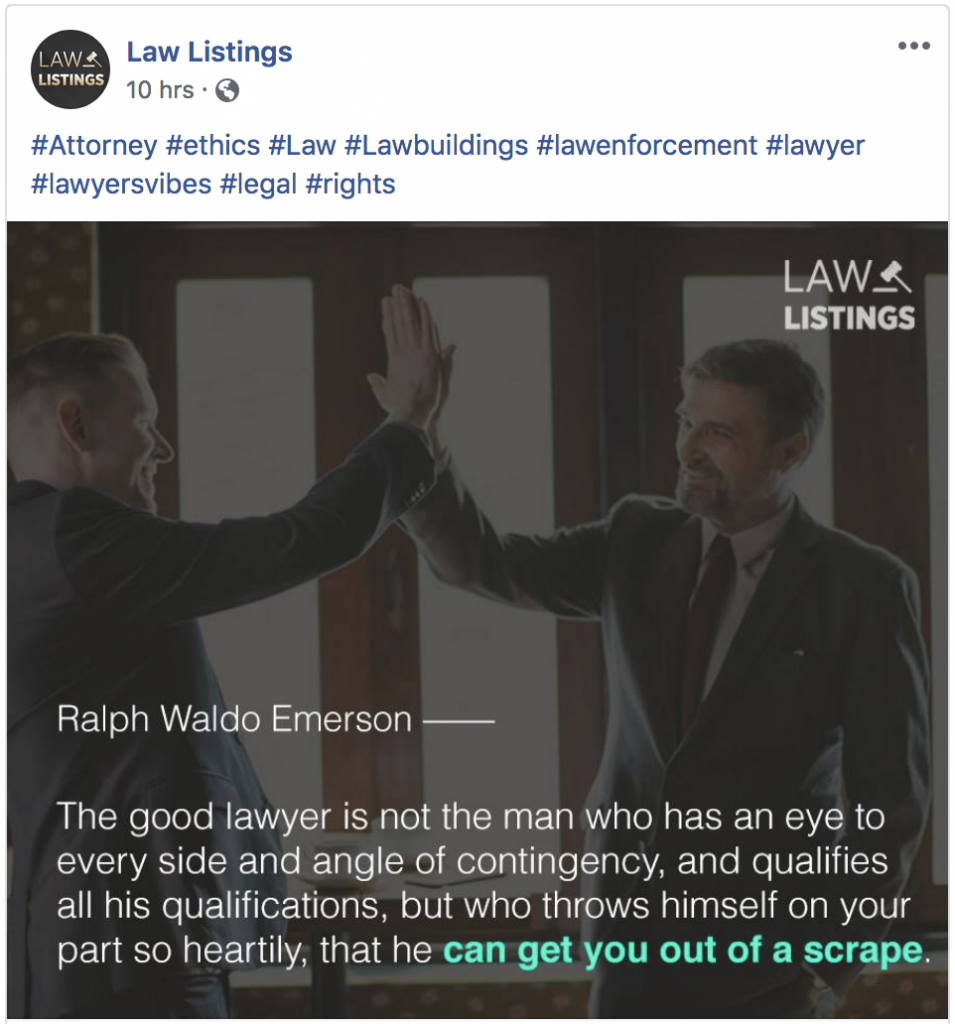 LawListings has a very engaging Facebook page that is a good example of visual quoting: They put together well-branded visual quotes and engage their Facebook audience with that content.

The pizza chain giant has over one million fans on their page. What makes their site so viral? Their generous interaction with the pizza community. They tag other users on Facebook, make it fun and very sociable by allowing fans to upload various pictures, images, photos and artistry depicting their brand in various ways.

Some of the fan photos are with family, creating a visual imagery of unity, while other photos that are incorporated onto their page are snapshots of different Pizza Hut restaurants or paraphernalia.

The motorcycle giant has over 700,000 fans on their Facebook page and use several marketing methods to attract and retain those fans. Much of the information on their site consists of photos and videos, but there is a heavier focus on information and updates about their product and the motor bike industry at large.

Fans flock to their pages to sneak a hopeful peek at what the upcoming bikes will look like and to read about any changes in their current bike line. Harely-Davidson is definitely an industry leader with a proven track record. Facebook has helped their online marketing efforts by reaching a technical aspect of their customer pool.

With one of the highest number of fans on Facebook, Starbuck’s remains at the top because of their frequent and engaging interaction with coffee lovers everywhere!

They are very involved in the local communities and abroad, and use videos, blog posts, surveys, and coffee giveaways to appeal to their customer base. Starbuck’s takes the time to carefully groom their social networking page to be sure that they effectively reach their customers, making them an outstanding industry leader.