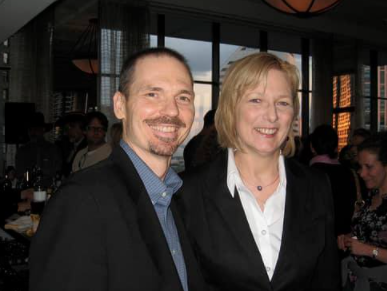 Terry “starbucker” St. Marie shared his thoughts about Liz during “Gathering Stardust for Liz Strauss.”  You can watch the video of the gathering here. Terry also sent us a copy of his speech so that we could share it with you here on Successful Blog.

I was blessed to go on a 7 year journey with Liz as a business partner.

Liz inspired me from the very first time I read her blog way back in 2006.

It was a post entitled – “The Ferrari Analogy for Organized Writing”.
In it she said,

“A great blog post is like a car date. We spent time together sharing your view. I follow your logic and then, if we connect, we talk about it.”

I was intrigued to say the least by this very unique insight, so I very shortly thereafter participated in one of Liz’s Open Comment Nights

It was classic Liz, Macguyver-ing her comment box into a real-time communications platform and inviting everyone to join the spirited conversations, led by her selflessness, kindness, and passion for learning & growing as a human.

This was before Twitter or Facebook mind you, so as usual she was way ahead of her time.

We quickly became online friends and as one lively comment night led to another, in late 2006 someone put “it” out there.

The “it” was a simple musing – “hey, wouldn’t it be cool if all of us could get together in person?”

That was the official birthing of what became SOBCon – the Successful and Outstanding Blogger Conference.

Because with Liz, it couldn’t “just” be a get-together. She figured, if people were going to spend money to for travel and lodging they should get something more than just a few happy hours. “We should teach them something meaningful, and we could all teach each other”

So we somehow, someway cobbled together the first SOBCon in May of 2007. Some of you were there, and I’m sure you felt the same way I did after it.

75 people hung out together for a weekend, and talked about their craft, their passions, and their lives.

It turned out to be magical. Trust was high. Candor was abundant. Egos were checked at the door. There was a depth to the dialogue that prompted many to declare how “life changing” it was.

There were no barriers to learning. And it was good. It was magic.

And where did this magic come from? Who was capable of conjuring up the ingredients of this potent mixture of trust, humility, and candor?

It was Liz, who lived and breathed those qualities. She deeply believed in the basic generosity of the human spirit, and the magic came from her belief.

When she entered the room at that gathering in Chicago, and every other single SOBcon after that – and we did 10 of them, in Chicago, Boulder and Portland – something wonderful happened.

She was the catalyst of a powerful enabling force that unlocked that same generous spirit from everyone there.

Liz Strauss WAS SOBCon – I just had the unique opportunity to be her partner in the venture and have a front row seat for all that magic.

It wasn’t all a walk through the park – putting on conferences was a bit like walking a tightrope without a net. But somehow, Liz would rise to the occasion and just in the nick of time pull in one more sponsor, or sell a few more tickets, to get us to the across the chasm and to the finish line.

I learned SO much from her during those 7 years, and also had so many laughs and experiences. Our SOBCOn parties at South by Southwest were absolute blasts.

But what was always extraordinary to me as I went on this journey with her were the one on one conversations she would have with people that could leave such a deep mark.

I lost count of the times friends, and total strangers for that matter, would walk up to me after having a “Liz Conversation” and tell me that their minds were blown – for the better.

She just had that way of clearing through all the clutter that most humans put in front of themselves and getting right to the heart and soul of the matter.

And she was relentless in wanting to make sure that every single person who attended an event of hers was going to get something meaningful out of it.

And she was relentless as a business partner in pushing me to help her succeed with that goal.

And you know what, I believe she succeeded, hundreds and hundreds of times over.

That was her supreme gift, her superpower – helping others find meaning in their lives, and be, in her words, “irresistible”.

That was wrong, actually – it should have been –

“Where the virtual meets the irresistible force of Liz Strauss.”

Love you Liz, and farewell my dear friend.

And to all of you, I will quote from a great rock band that the SOBCon community was particularly fond of –