Last week, in my Internet travels, I stumbled across a reference to Whuffie.

No, Whuffie is not a cleaning product.

The Whuffie Factor, by Tara Hunt, was published in April 2009, when we were all talking about “Web 2.0” and Captain “Sully” Sullenberger. If you didn’t pick up this seminal book five years ago, you should go grab a copy now. Its advice is still very relevant today. Among other things, Tara predicted the rise of subscription music services, content marketing, and many of the reputation-building ideas that are now canon.

Tara Hunt hasn’t relaxed over the last few years, moving from co-founding the groundbreaking Citizen Agency to her current position as Social Digital Leader at MSLGROUP, and helping her clients build relationships along the way. As a long-time participant and builder of online communities, Tara exemplifies the principles she advocates…she walks the walk. When I randomly reached out via Twitter, she was right there and ready to share her thoughts about how things have evolved over the last five years. 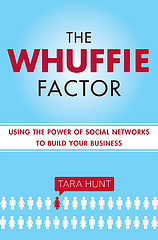 ItÂs been five years since you wrote The Whuffie Factor. What do you think has been the biggest business shift during that time?

Has it already been five years?! I canÂt believe how much time flies. The biggest business shift during this time has been the overall adoption of social media into the marketing mix. There are very few companies that donÂt do anything at all online. The issue now is that everyone is using social media tools, but very few are actually using them truly socially. I see too many examples of companies putting the same kind of content on social networks as they would have placed in traditional media. ÂHere are our product benefits!Â ÂOur product is awesome!Â ÂYou should try our product!Â The medium has changed, but the strategy has not.

Do you think itÂs more difficult now to build Whuffie?

The bar is definitely higher now to build Whuffie, because brands are competing with their own customers for trust and attention. In the beauty space, the amateur YouTuber has hundreds of thousands (and even millions) of subscribers who hang on their every word while the huge beauty brands with their enormous budgets are still struggling to get any engagement. They try to pay for it, but itÂs fleeting. Individuals understand how to build Whuffie because every relationship is important to them Â especially when they are starting out Â but brands are still thinking in terms of mass market. They donÂt know how to invest in one relationship at a time. They are so used to buying a large number of views. They donÂt realize that those individual relationships are worth so much more in the long run than a paid view. ItÂs a matter of valuing the wrong metric.

That being said, the bar is still set pretty low for brands and we celebrate brands that even partially understand this. So, I guess it isnÂt more difficult to build Whuffie, itÂs just still a foreign concept.

Is Whuffie like Fight Club (i.e., if you have Whuffie, you donÂt talk about Whuffie)?

Hah! ItÂs more like being cool. Cool people (and brands) donÂt say they are cool. They just are. If I went around bragging that I have 50,000 followers, people would wonder how valuable that audience really is.

Online communities are a hot topic right now; are you surprised itÂs taken this long for everyone to wake up to the value of community?

Yes and no. IÂm surprised because it has seemed obvious to me for nearly 15 years, but IÂm not surprised because IÂve worked with so many clients over the years who need to see where something is going before they are willing to invest in it. The bigger the company, the more risk-averse they are to trying ÂunprovenÂ techniques. They have more at stake. They have to report to shareholders and employ leagues of people who count on them to grow the company. I understand that. However, IÂve seen so many examples of companies who win time and time again because they are willing to take a leap of faith. Everyone who waits to watch the results, then jumps in are shrugged off as late adopters.

When I went back to re-read The Whuffie Factor, I expected to find a lot of material that would need to be updated or tweaked because so much has changed in five years, but itÂs surprisingly evergreen advice. What would you update if you were going to publish a revised edition?

You know, that is wonderful to hear! I get tweets from people all of the time that they just finished reading TWF and got so much out of it and I usually answer, ÂReally?Â LOL. I shouldnÂt be surprised, though, because core principles are core principles and thatÂs why I wrote it to be more of a business philosophy/strategy book than a business tactic book. If I was to publish an updated edition, I have hundreds of new examples to underscore the basic premise that brands should be focused on building Whuffie and not likes/followers. The examples I used were tiny compared to what has happened.

Would you like to shout-out any companies or brands that are ÂWhuffie-richÂ right now? It looks like Threadless (which you highlighted in the book) has done a great job of keeping its Whuffie going.

Threadless keeps it going because being truly social is in their DNA. There are lots of new upstarts like Dollar Shave Club, Hello Flo, Uber and AirBnB that also have social in their DNA. They arenÂt afraid of it. They embrace it and gain loads of Whuffie. But there are also some bigger companies that are impressing me. Chipotle has done an amazing job of building Whuffie in a crowded fast food market. Burberry, under Angela Ahrendts took all sorts of risks as a luxury brand to become more social and digital and it paid off in winning a whole new generation of buyers. There are multiple luxury brands who are winning over new generations of buyers and seeing it pay off handsomely like Chanel, Donna Karen, and Diane von Furstenberg. On the food side, Red Bull and Oreo are killing it with their focus on engaging social content. Red Bull sees themselves as a creative content shop that happens to sell an energy drink. What the Whuffie-rich examples all have in common? They focus on the customer, not on themselves.

You predicted the rise of music subscription services (monthly fee for unlimited downloads). Are you using Rdio, Spotify, Pandora, or Beats Music yourself?

Did I? Yay me! (I know that I should remember that!) IÂm using multiple services: Focus@will, Rdio, Spotify, and more. Plus, itÂs moved into video. We watch everything via streamed service and havenÂt had cable in eons. And for magazines, IÂm using NextIssue.

I see youÂre writing a report about Furry Influencers. Can pets have Whuffie?

HahahaÂ.yes. It seems from my research, they can have a WHOLE LOT OF WHUFFIE. ItÂs serious business now. These Furry Influencers are signing six-figure deals and hitting more red carpets than some of the traditional human celebrities. There is all sorts of amazing psychology behind this, but in many ways this breaks the authenticity rule. We all understand that it isnÂt LÂil Bub or Boo the Pomeranian who is behind the keyboard or camera phone, but we listen to them anyway. We are reeled in because we love the content (adorable animals satisfy our dopamine addiction), then we find out about pet brands from them. I subscribed to BarkBox because of Manny the FrenchieÂs Instagramming his monthly box. There is actually research that cuteness can make us more indulgent. This is dangerous!

If you’d like to connect with Tara, you can find her at http://tarahunt.com or as @missrogue on Twitter.