I’m a curious observer. I look, listen, connect things and identify patterns. Then I ask questions to test what it is that I think I’m finding. That’s one way that I keep learning new things about how the world works and how the people in it decide to do things.

Recently on Twitter, Calvin Lee @mayhemstudios posted an link to an article on Business Insider revealing data about Twitter users who don’t listen. Derek Overbey @doverbEy read it and retweeted it. As did I. 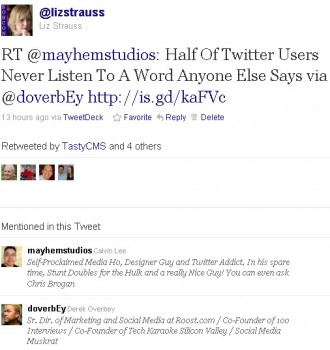 As you can see by the image, four people passed it on again.

What to Do About People Not Listening – on Twitter or Anywhere

Reading the data about people not listening on Twitter got me curious and turned me into an observer. As I looked, listened, connected things, and identified patterns, I asked a question to test the ideas that we’re coming together.

Asking questions gives me a chance to listen for myself. Question influence people to respond and in their response are hints and clues to how they think. The response I received fell into a pattern I’ve found predictable when I put an open ended question to the group. I’ve named the types of responses to reflect the group they represent.

It’s been said that we can’t talk without talking about ourselves. The words we choose, the metaphors we use, the choices we make of what to respond to and what to leave there all reveal things about our own view of the world and ourselves.

What might be more important to keep in mind is that we find every one of these types of listeners in every walk of life online and off. If we listen to identify them, we soon some to realize that every kind of listener is looking for a different sort of response and a new question arises …

Some listeners seem to signal by their response that they’re better left to have the final word. What do you think on that?