The theme of SOBCon09 is the ROI of Relationships. To underscore the importance of relationships in business and to have a chance to make and celebrate a few while we’re doing that, I’ve opened up this series by successful and outstanding bloggers like you.

The first thing I noticed when I met Steve Farber were these linebacker shoulders that appeared as if they could support the world. Then he said, “Hello, let’s get breakfast,” and the smile in his eyes and voice made me think of Butch and Sundance saying in the old movie, “Who is this guy?”

Steve Farber had been someone I’d wanted to meet since the second I’d read both of books, The Radical Leap: A Personal Lesson in Extreme Leadership

and The Radical Edge: Stoke Your Business, Amp Your Life, and Change the World

The charcters in his business fables, one particular named Agnes, had become people, friends to me. Agnes had sent me on a quest to identify that single value that wrapped up all my values into one. She called it “finding your frequency.”

Now Steve has a new book called Greater Than Yourself: The Ultimate Lesson of True Leadership.

I’ve read that too and it’s set me on another quest how to change the world one person at a time through generosity of spirit and true leadership.

In this new fable Steve investigates the story of a note he found inside the case of a guitar he bought, He meets people who believe that raising others up above themselves is the greatest form leadership. It sounds simple: expand yourself, give yourself, replicate yourself. But the commitment to choose another person well, to offer over all you know and give access to is a huge and wonderful form of extreme leadership.

In the video below, Steve talks to Patrick Lencioni and Matthew Kelly — their story is told in the introduction to the book. You’ll find more about them and others on the Greater Than Yourself site. 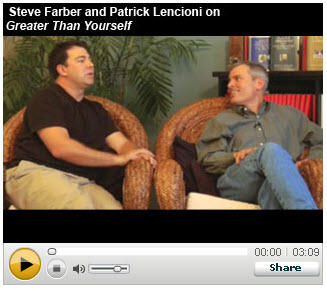 Steve will be stopping in at SOBCon this year. I can’t wait to see him. I’ve already started working on my Greater Than Yourself Project. You can learn how to start yours by reading this book.

Experience the ROI of Relationships