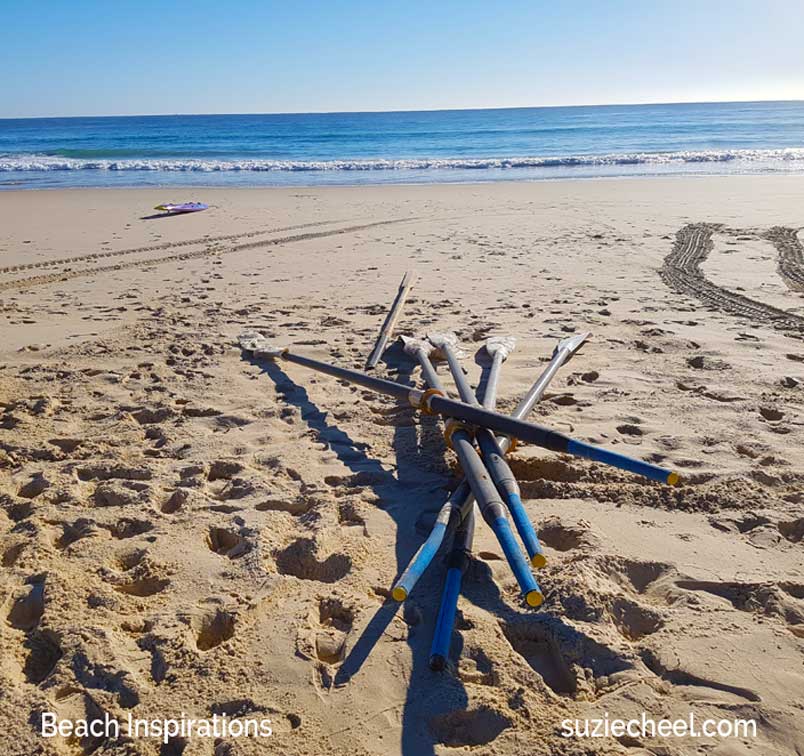 These oars are part of a great Australian story of the volunteer lifeguards (we call them lifesavers) who patrol surfing beaches around Australia every weekend in summer.

The oars are for the open boats that were traditionally used for rescues that were too hard for an individual lifesaver to get to. In today’s inflatable boats with outboard engines and jet skis world, the boats are no longer used as part of the rescue apparatus, but happily the tradition lives on with clubs maintaining boats and crews and competing in the “surf carnivals” held around the country through summer.

Probably because the boats are not part of the basic rescue setup these days, they all need sponsorship to be bought and maintained. Typically, that seems to be by local businesses.
It’s a thrill to see one or more of these boats, each with a crew of 5-7, two or three each side and the “sweep” steering from the stern, breaching the surf, sometimes elevated at such an angle you wonder if they are going to tip over and be swamped – and that does happen.

Until fairly recently crews were all male – as were the lifesaver patrols in earlier years – and the boat crews were traditionally pretty tough. In recent years there has been a big uptake of surf boat racing by women crews.

One joke about the selection of crews in older days was that contenders would line up and others would throw house bricks at them: the ones who didn’t duck were selected.

In the photo here you’ll see that in the daredevil tradition of surf boat racing the crew are not wearing any special safety protection such as inflatable vests or helmets. 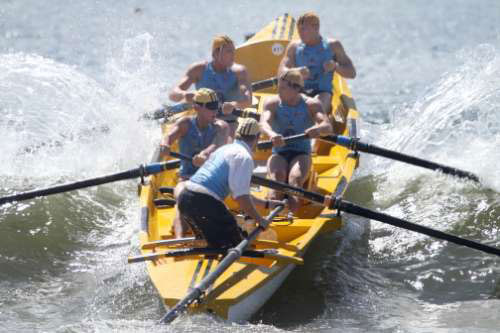 It is amazing to see how a bucket that was originally designed to carry water is so often used to create sand castles and in this case create a city of castles.

Someone, somewhere, some time, took a bucket which up till then had only be used for carrying water or other practical purposes, filled it with sand, tipped it upside down and created the first sand castle.

Now all over the world children get their little buckets and make sandcastles, delighting themselves and others.

This is how creativity works sometimes, through play, not through striving. 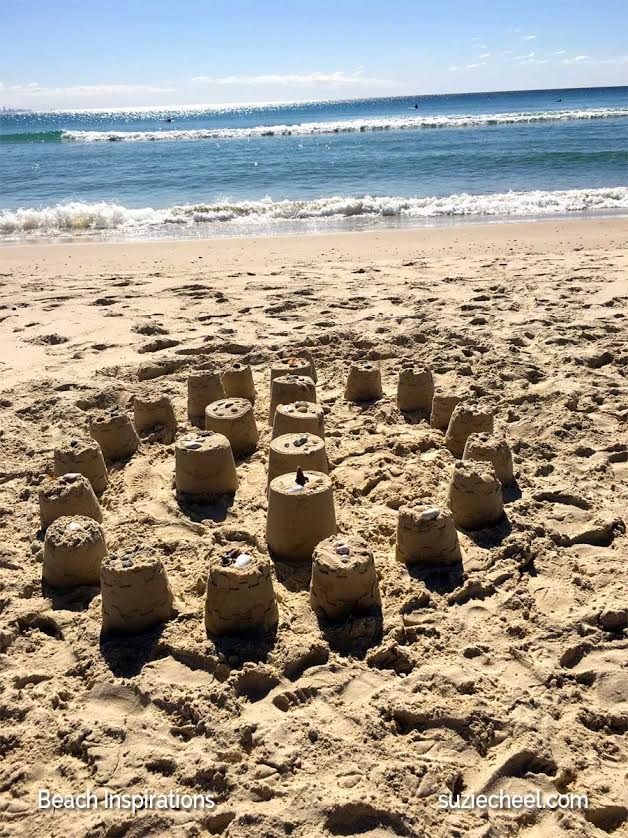 Most beach pictures seem to be taken on bright, sunny days. But it’s the same beach, the same sea, on gray days and rainy days.
Like life, like business. Just because not every day is wonderful doesn’t mean life isn’t wonderful or business not full of possibilities.
Just see it through. That old sun will come out again. 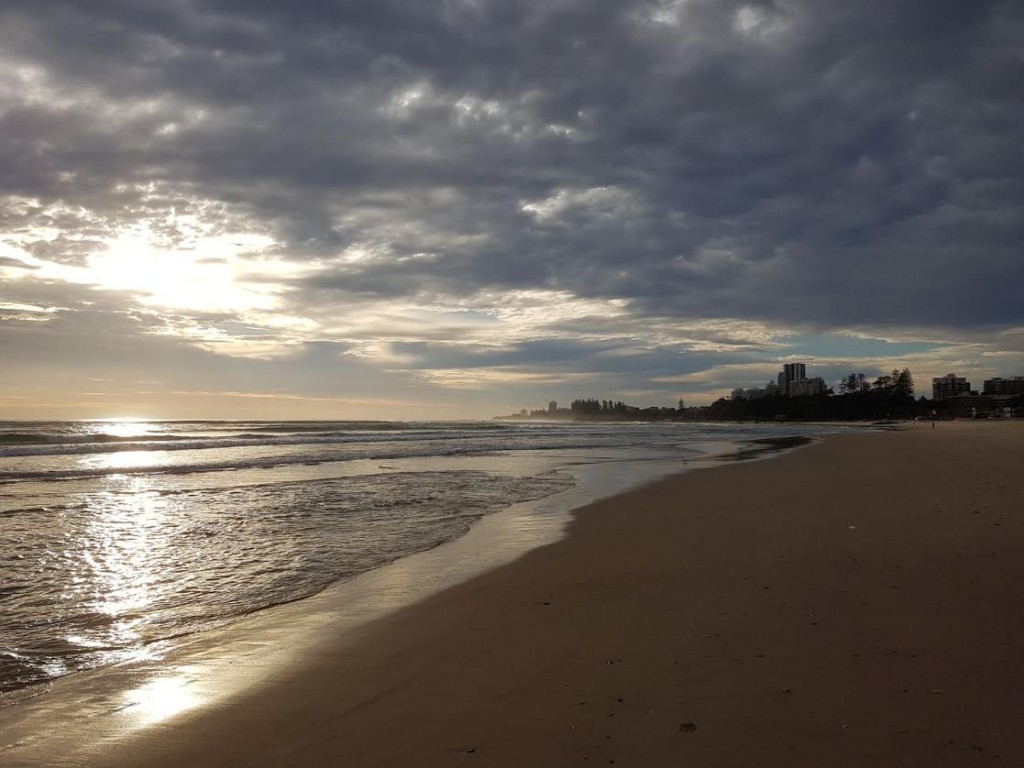 We were greeted by these beautiful sandcastles one morning as we were walking on the beach.

It is such joy to start the day with the creations of others that nature has left for us to enjoy before the tide comes in and washes them away. 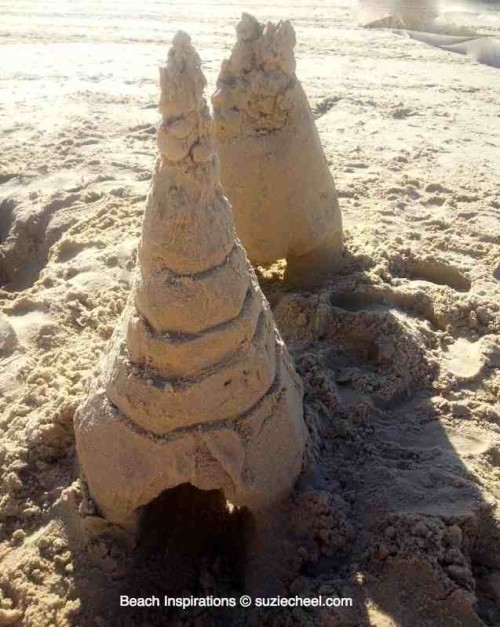 By Suzie Cheel and Des Walsh

Female lifeguard putting out the flags for the safety swim area at Kirra beach. Most lifeguards are male 🙂 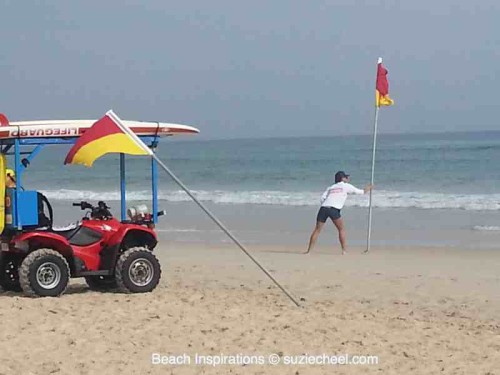 Walking onto the beach this morning we saw this sand castle and Des said: “It’s holding out against all odds,” as the waves crashed in.

The next moment the top was gone yet the base remained. 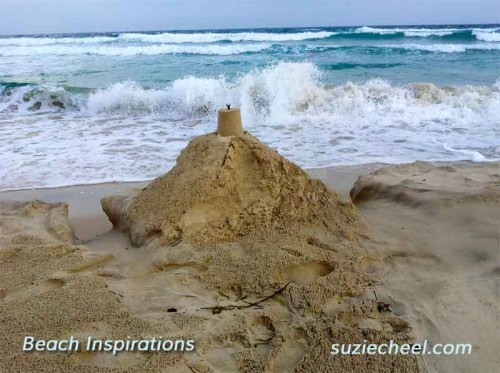 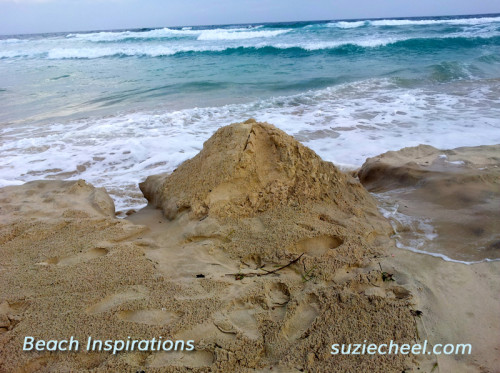