Brittany – funny I feel okay to share her name now (I asked) – has been released from jail. All her charges were dropped. Her “friend” showed up and confessed to an armed robbery that Brittany did not commit but was involved in.

Sometimes it’s difficult to keep an open mind. Sometimes we have beliefs and convictions that we know are right and refuse to let anything change that. One thing I have learned from working in social media is you never know who may have the next great idea, what project you may work on, or who may become a close friend. The same goes for “real life” as well but is often not as apparent.

I’ve talked about Brittany before, and her struggle. They were some of the hardest posts I’ve written because they were the most personal. Interestingly enough, they were also the posts I received the most feedback on and the ones that actually gave me hope and kept me persevering. Thank you for that.

Before her release I had been running into wall after wall advocating for her in an attempt to get her into a rehab. I am still doing so and still running in the same circles; passed around and around. I will not give up.

Brittany has a criminal record of over 50 convictions, many are breaches of probation orders, but the majority is theft-related. Drugs are an expensive addiction. Jail does not help people with addiction issues – jail warehouses many who need help.

Brittany is a wonderful, funny, intelligent, insightful, witty, and beautiful nineteen-year-old woman. She loves to read, write, exercise, eat well, hang out with friends, go shopping, and have fun. We have a lot in common. 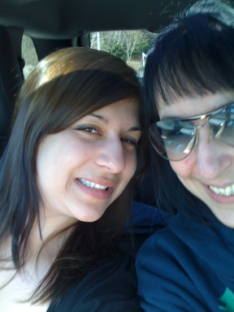 She asked me once if I had met her as an addict in jail and heard of all the crimes she had committed would I still like her? I answered that I honestly didn’t know but probably would not. But I can honestly tell you right now that I love Brittany and am proud to know her and call her my friend. If I had not had an open mind and an interest in her story, I would not have the honor of learning with her and calling her my friend.

We keep in touch by text now. She’ll contact me when she has a craving, a good day, bad day, or to see how I am. I call on her when I’m discouraged or need a boost. She listens, she laughs, and she gently speaks an insightful truth that makes me think. I have learned from her and leaned on her. I value her friendship and judgment.

I hear a lot of talk in all circles I am involved in of this person doing this, or how could this person possibly be thinking of that action or, one closer to home for many of us, people criticizing those who do things on social media platforms, which we don’t agree with. I hear people criticizing the marketers, the celebrities, those who run the businesses, and I frankly wonder why.  What I have learned from Britt, and from social media, is that there is something to be gained and something we can learn from everyone. It often comes from the least expected places. We just need to keep an open mind, and heart.

from : Kathryn Jennex aka @northernchick