We Need Someone Outside the System We’re In

Some kids learn to ride a bike by just getting on one. They ride and fall down until the falling down part stops. Other kids have the luxury of someone who runs alongside the bike helping them balance as they ride. Those kids get fewer bruises and meet the sidewalk head on fewer times.

Launching a new idea, product, or service is a lot like riding a bike, or maybe more like trying to ride a horse after you already know how to ride a bike. 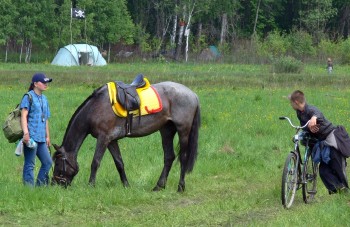 We have a grand idea. It’s a good plan. We’ve think through the audience, how we’ll reach them, and how we’ll connect them to each other and our grand service, amazing product or outstanding event. …

Whether we work alone or on a highly competitive corporate team, the hardest part of our work is to get a balanced appraisal of our idea before we take off on the ride.

Each of us is inside a system — a network, a business, a circle of family and friends. Shouldn’t we be able to find help there? Maybe not, because …

The problem is that we can’t see the holes in a plan that we’ve made. What we need is the feedback of a naive intelligent customer who doesn’t know how we got to our idea.

Who Won’t Let You Fail

What every system needs is someone outside the thinking to come in at the end to say “Why that?” Imagine a guiding angel (not a devil’s advocate) who is 100% for seeing you and your team succeed with the highest quality result.

The businesses who do more of this are the ones who come to market with renewed confidence. Recently, Dell did a great job of seeking out this kind of advice with their #DellCap initiative. (thanks Dell!) Old Spice has been listening in lots of new ways. SOBCon owes much to so many people: Britt Raybould, Kevin Ferrasci O’Malley, Geoff Livingston, Sheila Scarborough, Chris Brogan, Becky McCray, Jason Falls, Carol Roth, Jonathan Fields, Stephen Smith, Chris Cree, and too many others to name– who have told us their truth while we were working on ideas.

We can’t be inside the thinking and outside the thinking at the same time. Having someone outside your system who won’t let you fail is the best investment a business can make. A few hours a month to check in on what’s planned can save thousands in time and resources invested in the wrong things because no one noticed the hidden assumption in your plan.

The question isn’t whether the outside source is paid. It’s whether the source can tell you the hard truth gently. The right source would risk your relationship rather than let you fail.

Some folks have it in their DNA that they can’t stand to watch anything fail. Find a few of them and get them on your team. Make them heroes. Listen to what they say or they won’t stay around long. What better safety net can a business have than people who won’t let them fail?

What companies do you know who have found a way to listen to folks outside the system who won’t let them fail?