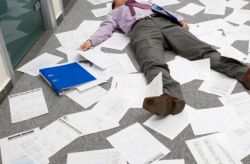 People want their work to matter

I was preparing to write this blog about how to make work more meaningful for people, when I heard a piece of an interview with Dan Ariely about his new book, The Upside of Irrationality.

I didnât hear the whole interview, but he talked about a test he did to measure how important meaning was in oneâs work. The test was to complete a task repeatedly, until you wanted to stop.

The task was to build a Lego robot.

When you completed it, you got asked if you would like to build another robot.

In one case the robot you built was placed to the side so you could admire it while you built the next one.

In the other case if you said youâd like to build another, they dis-assembled the one you just built right in front of you,Â  gave you back the pieces and said, OK build another one.

How to drain all meaning out of someoneâs work

Iâm sure I am doing a dis-service to Dan Arielyâs work by taking this out of context, but that is one of the best metaphors I have heard for taking the meaning out of someoneâs work!

It got me to thinking, what are all the ways we drain meaning from our employees work, dis-assemble their robots right before their eyes, mabye even without recognizing we are doing it?Â  And how can we build up the meaning instead?

1. Changing your mind all the time

Someone completes something you said was really important, but you changed your mind since you first assigned the task.Â  Now instead of accepting the work and thanking them, you gloss over it and ask them to do something else instead. Â  Then later you change your mind again, maybe even back to the first thing.

Robot parts are flying at this point!

Let people finish things.Â  Donât keep switching the task before people can complete things.Â  Consider the full cost of changing your mind.Â  If you really have to change your mind, donât skip the closure.

Thank people for the work, and communicate a reason why THEIR work still counts,Â  even though YOU have changed your mind.

2. Not accepting something different than you do it

Be careful here, just because it isnât like you would do it, doesnât mean that itâs not good enough, or maybe even better.

Build the robot again, but this time use the blue legos for the feet and the red ones for the arms because that is how I do it.

You are far more likely to create meaning if you accept good work, than if you tweak it to death just to make it exactly like you would do it.

The urgent customer issue or demand has disappeared because you either won the deal or lost the deal. The team has been working frantically to produce or defend something.

When you no longer feel the urgency, you either forget to call off the team, so they keep working round the clock â oops!Â Â  Or you just never go back to collect the work, because it no longer matters to you.

Just because it no longer has meaning for you and you have moved on to other things, doesnât mean you should take the meaning away from the people that did the work.

Save the robot as a resource

If the work is no longer necessary, close out the project, thank them, and have a quick brainstorming about how we can use this important work for another customer or to solve a general issue.

Itâs so much easier to just move on to your next urgent thing, but you are sacrificing your teamâs motivation an ongoing performance and support if you skip this step.

4. Not being clear about the strategy

This is probably the biggest and most common hazard I have seen.

Companies are fuzzy about what their strategy is.Â  But they demand lots of hard work from people, and it is utterly impossible to understand if the work matters to the strategy or not.

Unclear strategy causes lots of wasted time and energy working on the wrong things, or waiting for decisions to be made, but it is really de-motivating for people to deliver work into a strategic black hole.

That is like throwing their robots directly into the trash can.

Make the strategy clear.Â  Itâs what creates meaning for the work.

5. Not connecting the dots for people

Even if the strategy is clear to you, donât expect your staff to automatically see how their work fits into supporting the big picture.

You need to spell it out and show them why their work matters. If you never connect the dots about how their work specifically supports the over-all strategy, there is no meaning in it for them.

Otherwise, they are just putting their robots on a conveyor belt to be used for unknown purposes.

Ensuring that all your employees understand how the business works, and how their work helps move it forward, motivates and enables them make better decisions and add more value.

With our without financial rewards your employees will do better work, faster, if they can personally see why it matters.

How do you create meaning for your employees?

This is a topic where concrete examples are so valuable. What’s worked for you? Please share your ideas in the comment box.

—–
Patty Azzarello works with executives where leadership and business challenges meet. She has held leadership roles in General Management, Marketing, Software Product Development and Sales, and has been successful in running large and small businesses. She writes at The Azzarello Group Blog. You’ll find her on Twitter as @PattyAzzarello