Focus on the Path Ahead

The Summer Olympics are coming up, and I for one will be perched in front of my TV and iPhone app (yes, thereâs an app for that) watching the proceedings.

I draw inspiration and courage from these athletes who dedicate their entire lives to achieving greatness in their event. There are so many lessons to take away, but one seems to jump out.

Have you ever noticed that the runners, swimmers, and other races NEVER look behind them during the race?

They focus their entire attention. Their entire being. Everything is focused on the path ahead, the swim lane ahead. The world may be on its feet screaming âheâs coming up behind youâ and the sprinter is in a zone of silence.

Let your competition focus on you 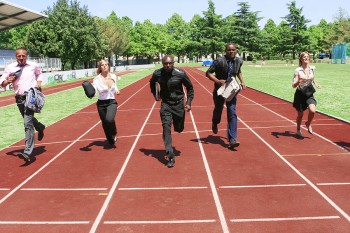 The next time youâre tempted to spend time worrying about the competition, think like an Olympic swimmer. Stretch, jump, and swim like hell toward the other side.

Let them worry about you.

Author’s Bio: Rosemary OâNeill is an insightful spirit who works for social strata — a top ten company to work for on the Internet . Check out the Social Strata blog. You can find Rosemary on Google+ and on Twitter as @rhogroupee