about credibility and what we do.

Not long ago, while we were listening to a talk show, a friend made a remark about a woman caller who argued a passionate opinion. She talked a bit longer than was acceptable for the the show in question. What he said was, “Anyone who can’t stop long enough to let someone else talk isn’t worth listening to.”

Have you met the pot that called the kettle black? With that sentence his credibility was shot. 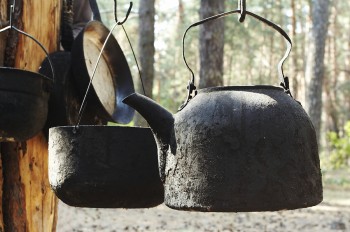 This friend loves to argue science, politics, and how things work — he uses the same arguments more than once. His style is exactly that. He makes his voice such a strong force that no one has the energy to argue his point. It’s fine tactic for winning, but not one for reaching the truth. It’s also, as he himself said, not a way to win people who want to listen to you.

I’ve been thinking about that dissonance ever since. What struck me is how often we dislike in others what is our own habit or fault. We hold up our values when we call someone out for misbehaving, but we lose our credibility when the misbehavior is something we do too.

I’m going to be a little slower to talk. I’m going to check for my own version of someone’s bad behavior before I point theirs out. I don’t want to be the pot that calls the kettle black.

Credibility is hard to renew.

Credibility means believability. How believable can we be if we knock a behavior we do ourselves? .

Does your credibility show in what you do?

Be credible.
Be irresistible.
Be the best version of you.