I’ll gather up the links you leave as I always do. You’ve got until 2pm CST on Thursday, September 6, 2007 — see the clock in my sidebar — to leave your link here in the comment box.
My version of the story follows the blank one.

The gaping void of the CyberSaloon 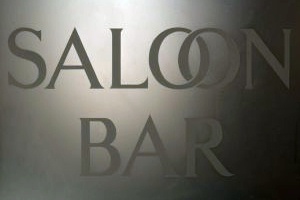 I had more than 45 things to get done, but I was looking for 1 Good Reason to forget all about them. An adventure was in order.

A couple of galaxies down and one nebula over I entered a place called Serenity Quest. I saw Plain Jane Mom making a Chris Brogan list with Photo Matt about 50 ways to Pick the Brain of or the guy who writes the blog that was on their screen at the moment.

Nearby TAXGIRL was ordering a Technical Bliss and Invincibelle had just ordered a jaffee juice.

Meanwhile, some Remarkable Parents were wandering aimlessly and asking, “Has anyone found a way to have a Life Beyond Code ?”

No one seemed to notice the group in a candlelit corner. Dressed in black, in cognito, Copyblogger held a rendezvous with Chartreuse (BETA), and Another Blogger. Rumor has it they were plotting to kidnap Guy Kawasaki and sell Alltop on the blog black market.

The meeting of folks from The Artsy Asylum broke into conflict with Buzzoodle Buzz Marketing over the principles of Confident Writing.

That seemed HUGE until Queen of Spain walked in on the arm of the Tracksuit CEO.

TwitterStars couldn’t shut up about that Internet Moment. As a result, two thousand people decided to eMail Our Military with the story, Lorelle fell off WordPress, and we heard obscure Ramblings from a Glass Half Full for days after.

PR 2.0 reported that, “It’s a matter of getting the rhythm of Life in Perpetual Beta.”

My own perspective is Genuine Curiosity proves out that Geeks are Sexy. Still, be aware. If you traverse Global Neighbourhoods and the gapingvoid of a CyberSaloon, it’s all too possible you might find yourself among the confused of calcutta.

Which isn’t altogether such a bad place to be.

We’d Be Celebrating about Now!

Akismet has protected your site from 1,004,381 spam comments.

Even lost some in various upgrades over the years.

Well, we can dream.

It Ain’t Easy Being Green

What Color Is Your Mind?

Go ahead. Tell me about yours.

–ME “Liz” Strauss
If you want to seriously sort your thoughts, we can do that too. Work with Liz!!

Hi, Everyone!
On Thursday morning, we awoke still living under the threat of the mysterious land shark. The London Online Conference Hall was ending. Would the shark be let loose?

At noon, I had a lunch meeting with Dr. Hsien, Hsien Lei. We met in the dining room of a famous hotel. 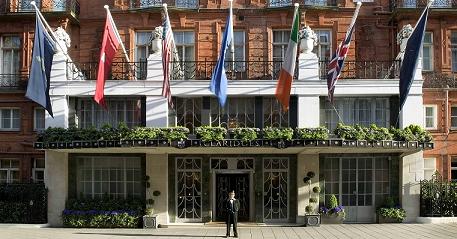 She put forth a scientific hypothesis about the land shark which, when we tested it, turned out to be true.

The shark was the only decent picture that the web dev guy had on his hard drive when he was building the site.

So our mystery was solved.

Ann headed back for the States this afternoon. I get to meet some cool folks at lunch today, a dinner tonight, lunch again tomorrow — and those are just the ones who blog. Then on Sunday, I get to come home.

PS When I’m not catching up with folks at mealtime, I’ll be in my room ironing my clothes.

Hi, Everyone!
Tuesday night, at the blogger movie premiere we had close call with the bloggerrazzi. Luckily, no one was hurt or went to jail. It seems they wanted pix of Ann and I for the tabblogs, but we pulled out our sunglasses, head scarves, and superhero invisibility capes. We lost track of them in no time at all.

We spent hours on Wed. at the London Online Conference Hall. The only hint of a shark we saw was some spilled water on the floor. It was time to pull in some serious help.

We turned first to a London taxi driver. They seem to know everything. 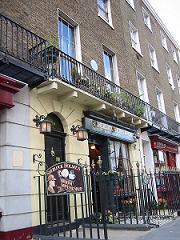 We asked our driver about the mystery of the land shark and told him of our concerns. He gave us his philosophy of life and a complete tour of the city. We saw sights that even Londoners will never know — places our driver suggested that land sharks might hang out. We asked question after question about land shark sightings. He made up the answers as he drove until we tired him out.

Then he delivered us to Baker St. He said to ask for a guy named Holmes.

The Holmes guy told us to make an appt. with a guy named Watson. We made a reservation for dinner instead.

PS That night we needed refueling so we took Kevin up his offer to meet other bloggers at a pub. Maybe they would have information from the underground about a land shark invasion related to the London Online conference.

Hi, Everyone!
We checked in at the conference on Tuesday. Still no one would give up any information about the mysterious shark.

Meeting after meeting found us talking about Web 2.0, social media, blogging, and content. Could we get a person to budge on something about the toothy predator? They showed no interest at all.

Then it dawned on us, which is quite a feat since it was late afternoon. We looked out our hotel window and saw a location that might hold a clue.

Ann and I called John Dodds to say we’d be delayed on our way to dinner, and we were off to see the famous bridge. 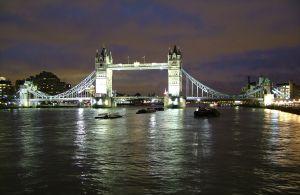 We were told that the original famous bridge is now in the southwestern USA. So we settled for this one — which has no appearance of falling down. That was a minor disappointment, for sure.

The bigger disappointment was that no one near the bridge had any information about sharks at all.

PS That night we accompanied John to a movie premiere exclusively for high-power bloggers. Our responsibilities to our industry had to take precedence over our charitable endeavors and our quest to save the world from land sharks just this once.