Three gentleman responded with interesting comments as you can see.

That got me thinking about influence again and how the experts define it.

Wikipedia and What Is Influence?

I spent a few hours reviewing what I knew and researching more about influence, its definitions, and its synonyms to arrive at the most basic idea that connects them.

Influence is the power to change behavior or beliefs.

In terms of social influence, they point to compliance, identification, and internalization. From what I see, the science of influence limits the change to be that which evokes a positive result.

Social influence occurs when an individual’s thoughts, feelings or actions are affected by other people. Social influence takes many forms and can be seen in conformity, socialization, peer pressure, obedience, leadership, persuasion, sales, and marketing.

Like the three who commented on my retweet, I agree, our words and acts have influence beyond what’s described here. Antagozing can influence beliefs or behaviors. Sometimes we influence without knowing it. Sometime our influence can bring about unexpected responses.

The Chihuahua and the Effect of Your Influence

We can set out to have influence or gain influence. We can see how our actions influence behaviors and belief systems. We can mislead ourselves into believing we have influenced in one direction, when in fact we have done no such thing. The intent of our influence does not guarantee the outcome.

Which leads me to the story of the chihuahua.

The Story of the Chihuahua 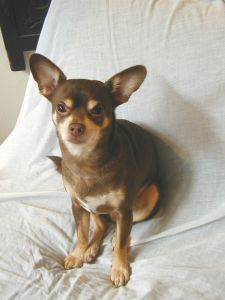 A man renovated his house, tearing out the entire kitchen. Every fixture, appliance, and bit of the original room was removed. He started over with four walls, one window, and the door to the backyard. During the winter rebuilding the kitchen floor was down to the concrete foundation.

The man and his wife had a chihuahua and the one thing the man hated was taking the dog out to the backyard to pay its call to nature, especially in the winter. So the man covered a huge corner of the torn-up kitchen with a rubber mat and some newspaper; put a dog bowl there; and he allowed the nervous little pet to do his “duty” there.

When the spring came, the kitchen was finished complete with very expensive new hardwood flooring. It was no longer acceptable for the tiny dog to stay in the kitchen when nature was calling. The man made a plan to change the dog’s behavior.

Every time the dog messed the kitchen floor, the man would stick the chihuahua’s nose in the mess and then toss the dog out the back door or out the open kitchen window.

The chihuahua did change its behavior. After it “went” on the floor, it jumped out the window.

Sometimes we mistake, misinterpret, and totally miss on seeing our influence. The man changed the dog’s behavior, but it wasn’t the change the man had been going for. All of the predictable outcomes of our influence aren’t always obvious.

No one is really without influence. we all have the power to move another person to change a belief or behavior. The most influential watch what how influence works in their own lives and learn from that. As my friend, Chris Brogan demonstrates exactly how he does that when he discusses ways we can improve our influence. It’s the quality of our thinking, the concern for the listener, and care in our delivery, that makes our influence move a thought or action in the direction we hope.

What examples of “chihuahua story influence” have you seen in business?