Yes, Virginia, There Is Such a Thing

I get tagged A LOT by memes. Some are fun. Some are not. Some hit me as downright silly.

Don’t get me wrong. Some are quite fun to write and fun to read. Some are educational and informational. Some, however, suck eggs and are the epitome of egotistical kerfuffle.

Lately memes have looked less and less like a fun way to answer questions, and more and more like a way to boost a Technorati rank. That got me wondering just what a meme is. I was sure that a meme had something to do with ideas and culture.

What is a Meme Anyway?

In his book, The Selfish Gene: 30th Anniversary Edition–with a new Introduction by the Author

, Richard Dawkins coined the term, meme, (rhymes with dream) to mean an idea that can replicate and evolve to spread through the culture. Memes are basic idea units that move, mutate, and adapt. They are the cultural equivalent of genes.

Beyond the personal belief about God is the idea of god as a cultural meme. Dawkins explained that God exists culturally. Here’s the page where Dawkins explained what he called the “god meme” and why it survives. 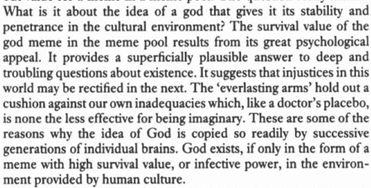 How Do Memes Spread?

Memes mutate, crossover from generation to generation. adapt, and change. They spread in ways more subtle than blog posts and tags that branch out by five times five.

It’s suggested that memes survive the same as genes — through natural selection. Six conditions can effect the ability of a meme to spread.

I suppose one could argue that blogging is a meme. But I’d have to say those blog posts that link back and tag five people forward would have to be memetic mutations.

I like the ones that tell more about the blogger . . . but I can’t get my head around calling them memes anymore. Anyone have suggestion about how to introduce a meme to rename the things that we have misnamed as memes?

How’s that for a problem?

Liz is speaking at at SOBCon 07.