These Times Ain’t So Different

As part of a my quest to move outside my dad’s story, to learn from it as a business case of a growing business in a bad in economy, I’ve been studying the climate, conditions, and character of the people who lived through the terrible economy after World War 1 through the 1929 Stock Market Crash and the Great American Depression.

One hero, a pivotal leader in changing the world, was Franklin Delano Roosevelt, the 32nd President of the United States, the only president to serve more than two terms, the man married to the famous Eleanor Roosevelt, also called FDR. 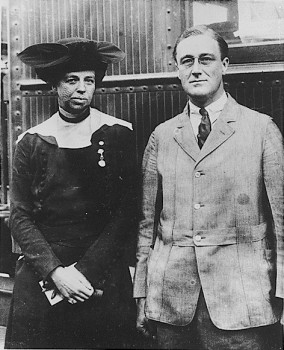 He’s of particularly interest because he was elected in 1932, at the height of the depression and took office in 1933, the year prohibition was repealed and the year that my father opened his saloon.

What if FDR Ran the C-Suite and Your Social Media?

FDR was faced with a jobless population and a world that was preparing for a second war. I don’t wish to devalue the power or gravity of what he said then, but as I read his speeches and his conversations, I can’t help to think his words and wisdom might serve us all now as we look for leaders — not dreamers — to change the world and get growing again.

To the students of Oglethorp College, he set this challenge in 1932, but every commencement speaker knows the audience is more than the graduates and as a presidential candidate he was speaking to the country as well as to those before him.

The country needs and, unless I mistake its temper, the country demands bold, persistent experimentation. It is common sense to take a method and try it: If it fails, admit it frankly and try another. But above all, try something.

The millions who are in want will not stand by silently forever while the things to satisfy their needs are within easy reach.

3: Connect with Young Hearts — your own and others

We need enthusiasm, imagination and the ability to face facts, even unpleasant ones, bravely. We need to correct, by drastic means if necessary, the faults in our economic system from which we now suffer. We need the courage of the young.

In his first inaugural address , FDR laid out the challenges we face and pledged himself to leadership for change in ways that resonate to this day.

This is preeminently the time to speak the truth, the whole truth, frankly and boldly. Nor need we shrink from honestly facing conditions in our country today. This great Nation will endure as it has endured, will revive and will prosper.

So, first of all, let me assert my firm belief that the only thing we have to fear is fear itself â nameless, unreasoning, unjustified terror which paralyzes needed efforts to convert retreat into advance.

Confidence… thrives on honesty, on honor, on the sacredness of obligations, on faithful protection and on unselfish performance. Without them it cannot live.

7: Achievement and creativity are joyful and thrilling.

Happiness lies not in the mere possession of money; it lies in the joy of achievement, in the thrill of creative effort.

And from his speech at the Citadel in 1935 …proof in his relentless, fearless, strategic leadership.

8: Our strategy will save us.

Yes, we are on our way backâ not just by pure chance, my friends, not just by a turn of the wheel, of the cycle. We are coming back more soundly than ever before because we are planning it that way. Don’t let anybody tell you differently.

Throughout the world, change is the order of the day. In every Nation economic problems, long in the making, have brought crises of many kinds for which the masters of old practice and theory were unprepared. In most Nations social justice, no longer a distant ideal, has become a definite goal, and ancient Governments are beginning to heed the call.

In his speech before the Democratic National Convention in 1936, he summed up our mission.

It’s good to have heroes. It’s good to learn from them and carry their wisdom forward with us.

The tools may change. The speed of connections may get faster.
But the values that move and motivate people to great things are unchanging, authentic, and core to our species.

These new social tools are only as good as the leaders who pick them up and the strategies and cultures they choose to bring to them. This new reach, this new speed the tools offer can help us, our friends, our clients, and the people we meet grow our businesses to get our economy rolling again … we are the difference in whether that happens.

What if FDR’s Ideas Ran the C-Suite and Your Social Media?

How will FDR’s words guide you to grow your business? How will you his wisdom to enlist those around you to join you to bring the economy back?