As a kid I loved the part of The Wizard of Oz movie where Dorothy’s having the ruby slippers made the guardian of the Emerald City say, “Well that’s a horse of a different color. Come on in!”

The other kids liked the lollipop dance. My mom liked the message that everything Dorothy ever needed had been inside her the whole time. I was fascinated with the ruby slippers, because at five years old I already felt it was important to ponder someday owning that one valuable thing that would make people want to invite me inside their magical world.

Sometimes we allow what we don’t have to define us.

Whether the thing we lack is money or a home or a heart, it’s easy to become so obsessed with what we don’t have that we think getting it will bring us all the happiness in the world. We set out on a path to get there – even if it’s the wrong one — and become determined to reach our goal at any cost. (Sometimes we even have to kill a witch in the process.) 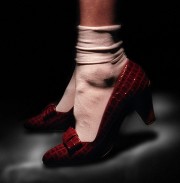 At 18, I bought a bunch of shiny shoes and entered Corporate America. Someone who promised she was a good witch held the glass doors open for me, and I got sucked in. Once inside I quickly woke up to the fact that I didn’t like what that world was made of. Flying monkeys, screechy munchkins, and green ladies who needed houses dropped on their heads gave me nightmares. I had flashbacks of elementary school, where every time someone asked what I wanted to be when I grew up, all I could visualize was the yellow brick road and the little man pretending to be a big bad wizard shouting “Pay no attention to that man behind the curtain!”

This wasn’t the dream I wanted to live after all.

Someone else’s yellow brick road might look like a promising path, but sometimes it’s just a really long way to get to where you want to go.

That doesn’t mean the path is worthless. I took everything I learned in my scary nightmare land of Corporate America with me to build the business I have today.

Just as I spent hours as a kid glued to the television watching The Wizard of Oz until my mother swore she would give our VCR away to some poor kid in China who didn’t have one, I spent many hours observing the green ladies and flying monkeys of big law firm life. I got to know a lot of different types of folks, and in doing so I made mental notes of everything they had and everything they lacked. I watched the ones who failed and the ones who succeeded — some of them did both — knowing that I wasn’t so fundamentally different from any of them. (After all, they grew up longing for magical shoes too.)

Watching them reinforced a few things The Wizard of Oz taught me:

You’ve gotta have a brain.

Wizard: As for you, my galvanized friend, you want a heart. You don’t know how lucky you are not to have one. Hearts will never be practical until they can be made unbreakable.
Tinman: But I still want one.

Wizard to Lion: You, my friend, are a victim of disorganized thinking. You are under the unfortunate impression that just because you run away you have no courage; you’re confusing courage with wisdom.

You’ve gotta have a home.

Dorothy: If I ever go looking for my heart’s desire again, I won’t look any further than my own back yard. Because if it isn’t there, I never really lost it to begin with.

And sometimes… it helps to have shiny shoes.

Of course, it also helps to know where you’re going and why you want to get there.

It helps to remember that there’s more than one path, and sometimes the best path is the one you pave yourself. Sometimes everything we need really is inside us the whole time. Other times, the stuff we need is only a friend (or a twit) away.

I left the corporate version of Oz in 2004. I’ve been paving my path since, building a business that helps other folks like me succeed — with the help of an awesome network of folks, many of whom I’m happy to call my friends. I can’t say I’m living happily ever after yet, but I’m a lot closer than I was. Meanwhile, I’ve given away most of the shiny shoes I bought, because I don’t really feel like I need them anymore.

What was your favorite book or movie as a kid? What lessons did it teach you that have helped you succeed?

Amy Derby is a law blog consultant and highly caffeinated social media addict who twitters — @amyderby — more than she sleeps.

Sometimes I meet Liz – in the city, or on Twitter – to talk about not talking about social media.

“I think I talk more about the muppets,” she responded.

I giggled a little as I wrote back, “This is you.” And I linked to this video:

She proudly retweeted. Because this is who we are. And this is what we do.

We go around and around, thinking up ways to change the world by connecting with it. Talking, walking, sometimes getting tired…

I don’t know much about social media.
I know more about cookies.

Since I was a kid I’ve had a delicious talent for intuitively choosing the best cookie in the jar. And as a kid, if you were my friend and I only had one cookie, I’d always give you the bigger half. I like to think that’s the most valuable thing Liz and I have in common. (I mean, who needs tools when you’ve got COOKIES? Ahem.)

Liz once told me, “Every star shines — brilliance is relative.”

I don’t remember why she told me that, except that that’s who she is. Her heart is always golden. Even in the moments I have no idea what she’s talking about, I trust her with all my heart because I know she would never let me fall.

We don’t have to talk about social media to teach social media. But to learn it, we’ve got to live it.

So when Liz asked me, “While I’m at WordCamp Las Vegas, will you hijack my blog? Maybe you could write five things people don’t know about me, like I wrote 5 Tips about Surviving on the Road with Lorelle that one time?”

… I knew I probably know just this one:

I’d rather learn the Muppet Metaphors of Social Media than bang my head against the wall studying the Cruel Calculus of Communicating Online.

What has Liz taught YOU?

Or, um, who’s your favorite muppet and why?