Savvy Companies Don’t Have to Do This

Tonight, a corporation made a colossal mistake. Motrin put up this ad.

The ad was meant to tell Moms with new babies that Motrin understood their pain. Except, in the process of building their campaign and that ad, they forgot to get in touch with new Moms and their pain.

I’m hoping this won’t scare off other corporations looking to enter the social media sphere. What happened here was problem with a team that didn’t do it’s job on two fronts.

Motrin didn’t do what they claimed. They also didn’t know the media in which they placed the ad. Savvy companies don’t have to make the same mistakes.

What Motrin Didn’t “Get” about New Moms

Some folks are saying that Motrin needs to understand social media. I’m with that. They blew it big. But social media only speaks to the size, speed, and volume of the response to their collosal mistake.

A company that claims WE FEEL YOUR PAIN. Better know what they’re talking about long before they get to the social web.

WE FEEL YOUR PAIN?
Motrin made it obvious that they don’t. 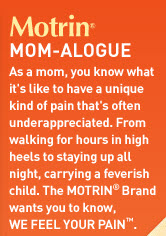 If you felt the pain of new mothers, then you’d realize that it’s off to use high heels and carrying a feverish child in the same sentence as examples of feeling underappreciated.

If you felt the pain of new mothers, then you’d see that the “fashion” of baby slings is a luxury very few new mothers think about. New mothers — with and without baby slings — are worried about more important things than that.

If you felt the pain of new mothers, then you’d understand that it’s not the ache in their back or in their head that makes them cry or say “what about me?”

The pain of new mothers is people who make light of their feelings.

It’s the hope that they’ll measure up and the worry that they won’t. It’s the folks who offer advice as if they know more than the new mom about what’s best for her child. It’s the people who say “Here, take a couple of headache pills and you’ll feel better after that.” It’s people who claim they feel her pain and don’t bother to find out what her pain is really like.

That’s the part that Motrin didn’t get about new moms.

What Motrin Didn’t “Get” About Social Media

The fundamental problem with the ad is that the “unique pain of baby sling” isn’t one of fashion or feeling underappreciated. The fundamental pain of a baby sling isn’t much more than “ouch, my back,” and then, only when the sling doesn’t fit.

That’s the kind of pain Motrin can fix. That story isn’t as glitzy or clever, but it is authentic.

Was she joking? Do new moms say stuff like that? Sure they do — with their friends — not with strangers. Friends can say things because friends already know that I love my kid no matter how I joke. Strangers can’t because they don’t.

Here’s where social media savvy comes in. A company has to be a friend before it can communicate with customers like friends. THAT’s the part about social media that Motrin didn’t get.

What would I advise the Motrin team to do? Get over being clever and get serious about learning. Here’s a short action plan.

It’s a spectacular opportunity to learn social media and to turn critics into heroes. A company that does that with everyone watchng could win over the social web.

Got more ideas for how Motrin might recover from this?