Social Noise Steals the Fuel to Do Extraordinary Stuff

When I was a kid, I wasn’t looking for my direction. No one said to follow my passion. I was a kid. I was on a quest to be extraordinary.

When I was a kid, I wasn’t bombarded with information from every dimension. My social circle was small. Now I have more social network passwords than the number of connections I had when I was kid.

Everyone seems to doing more than I am. Everything seems to be growing faster than anyone could manage to follow. Conversations bifurcate, trifurcate, and splinter off in bit and pieces. Sorting value from spam isn’t always a case of checking whether it came from a friend.

Ideas get kicked around like a soccer ball on the field where I hang out. I’m following echoes down trap of social media noise and deafening conversation straining to hear what my friends are saying.

In the process, I’m losing my own voice.
And the social noise is unraveling my passion one thread at time.
Sheer exhaustion steals the inspiration and the direction that I had when the day began.

Is Social Noise Unraveling Your Quest?

It’s a challenge to stay calm when the screen is always updating and we’re always chasing the next link or headline that shows up. Curiosity takes fuel to run. And every generous spirit who does a good turn or sends a good wish seems to be calling us to return a good one now then. Do you find that after some time on Twitter or Facebook, your head needs a long, cool transition? It only makes sense that all of that fragmented data makes a brain want some time to sort.

The social interaction can undermine the strongest determination we have to move forward by using it all just to keep up with what’s going on. Is social noise unraveling your quest?

Do you lose track of the kid in you who wants to do extraordinary stuff?

Here’s my recipe for getting past the noise and distraction and back to doing extraordinary stuff.

I turn it off.

In a minute of silence, I remember my quest.
When I look out the window or stand and stretch, it gets easier to tune into my resolve.
Knowing where you’re going is irresistibly attractive.
It also fuels the noble cause.

Passion needs direction, or it gets lost.

How do you keep the social noise from unraveling your quest?

Be irresistible.
–Me “Liz” Strauss

“Square peg in a round hole.” That’s what people used to call it.

Even as a kid I knew it was a silly waste of time to put a square peg in a round hole. That was just plain common sense To make the peg fit, it wouldn’t be a square peg anymore. It would hurt the peg, and the hole wouldn’t like it.

What makes some people grow up to live highly creative lives? Is it in their genes — “the way the tree was bent”? Is a creative life determined by their experience?

Yet, what is astonishing is the great variety of paths that led to eminence. Csikszentmihalyi

Though the 91 creative people in the study that became the book, Creativity, had unique characteristics and traits that made them stand out. The life paths that led to their creative contribution were not particularly different from what you might find any group of 91 citizens.

Those same circumstances describe the people I call my friends, none of whom yet have changed the world through Creativity with a capital C.

It seems that the men and women we studied were not shaped once and for all, either by their genes or by the events of early life. . . . Instead of being shaped by events, they shaped events to suit their purposes. . . .

According to this view, a creative life is still determined, but what determines it is a will moving across time — the fierce determination to succeed, to make sense of the world, to use whatever means to unravel some of the mysteries of the universe. Csikszentmihalyi

Success doesn’t happen without giving ourselves over fully to what we’re pursuing. It’s not the barriers that stop us, it’s the way we respond to them.

If we’re determined, we maneuver over, under, around, or through them. It doesn’t matter how difficult the problem we stick with it until we innovate, create, or cobble together a solution that solves it. 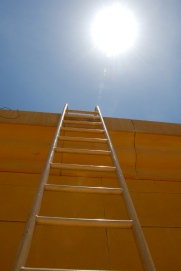 Determination removes options other than success: We refuse to define our outcomes as:

How have determination and creativity contributed in your past success? What are you determined to accomplish now?