Conversation Is Often the First Step

In 2008, I wrote a blog post entitled “3 Reasons Iâm Sorry I Joined Doostang … ” which has become one of most consistently visited blog posts on my blog. That missive explained a bad experience that I and my friends had with the web platform in mentioned in the title.

Upon publication, I heard no word from the people at the site in response to my many attempts to solve the problems.

About 2-and-a-half years, I received an email from an employee asking if we might talk. We had a lovely hour-long conversation in which we talked about what the company was doing and how she said it had changed. I asked her, how would I know? Could you give some reason that I might believe you? I never heard from the company again.

A few weeks ago, I received an email explaining that Doostang had been sold and set up another conversation with Jeff Berger the new CEO. We talked for almost an hour about what had changed, where they were focused, and the history of the blog post I just described. He asked if I would take the blog post down. I said I wasn’t comfortable doing that because of the extensive comments on it, but I offered him the opportunity to write a blog post of his own.

I recently came across Liz’s blog post about Doostang from 2008 and am disappointed that the previous team demonstrated such arrogance and poor customer service. The entire situation was mishandled – Liz, I’m very sorry.

I was not part of Doostang in 2008, nor was anyone on the team today. The company was acquired last summer, and weâre a new group with a single goal â to provide our members with thousands of hand-picked job opportunities from top employers. Our focus is entirely on quality job content, and we’ve removed the troublesome networking features that Liz blogged about.

We’re changing the way we do business at Doostang, and we hope you will give us another chance to help you find your ideal job. In the future, any prospective or current customers experiencing trouble with Doostang can email me directly at Jeff@doostang.com.

Do you have any advice for Doostang in this day of reputation management?

For those who come looking for a short, thoughtful read, a blogging life discussion, or a way to gradually ease back into the week. I offer this bloggy life question. . . .

In March, I wrote a post in response to a bad experience at an “elite” social networking site. I’ll wait while you check it out. . . .

In a day or so, two things happened.

Mid-May that post started to draw 5% to 10% of my daily search traffic. As you can see by the comments there, it can’t be helping Doostang’s elite self-defined profile as social network for top tier talent.

This week, I saw traffic from The New York Times article by Andrew Ross Sorkin, called Social Networking on Wall Street. The comments were less than favorable. Someone named John had left a link to my original article there.

I’ll wait while you take a look.

If Doostang asked for your advice, what would you tell them to do?

The Insider’s Guide: Start a Conversation on Your Blog!

Too Secret for Me

You must guess how hard I tried not to write this. I sat down, turned around, wrote several emails, found their blog and asked for help. . . . But I also think bad practice is bad practice and bad service is bad service. I don’t want any more of my friends asking their friends to get involved with a service that seems only to serve itself.

It all starts with an invitation that reads something like this . . .

I’ve requested to add you as a friend on Doostang, an invite-only career community started at Harvard, Stanford, and MIT. You can use Doostang to find a job or internship, network, and access valuable career information from peers and industry professionals.

Harvard, Stanford, and MIT . . . pretty enticing. Some great things have some out of those schools. Some folks who have gotten nowhere have also started in exactly the same places. But most folks who go there are smart in some way — eh?

Inside Doostang are networking opportunities and job listings — some are open to all; many are open only to members of certain “professional groups.” There in lies the rub. To be considered for membership in one of those groups, a member must

Note: The new member cannot see much more than the group’s name. There may be a slight description, but you’ll find no qualifications for membership, no viewable list of members, no sample of jobs that they’re hiding behind their membership.

The invitation above touts the core value they offer, but the rules are that you deliver your value to them before they deliver that core value to you — if they do.

I invited 20 of my friends who joined. Then I applied to four “professional” groups — two I cared about. I was rejected from all four of them. What appeared was single sentence that stated simply your application was rejected — no details were given. No sender is anonymous. The qualifications needed are stated nowhere. There was an invitation to contest it.

I went to the forum to check that out. There I found a thread which said that nearly everyone gets rejected from every group! The information came from a Doostang team member, stating that each group decides who will fit the qualifications of the jobs they offer. I visualized a secret meeting in a secret room. I would quote what I read and link to it, but I can’t (see reason three.)

I took up the offer to reapply to two groups, pointing out my experience in the given areas. I was accepted. The jobs weren’t as exciting as one might expect.
Many of the job listings use that phrase “top-tier school” as a qualification. Guess that would exclude Truman Capote, Bill Gates, and Matt Mullenweg, all of whom left that path to make their own success.

Unfortunately, some highly qualified friends with deep educational credentials and visibly successful careers did not have the same reapplication success. My friends feel “taken” because they shared their high level contacts only to be treated this way.

Perhaps being rejected was more of an honor than getting in?

Reason 3 — Secret Locks on the Door

While there. I wrote roughly 3 emails asking to start a conversation about consulting possibilities regarding jobs that were offered. When I got no response from all three. I decided to sit back to watch how things worked. I watched for what seems a month.

About 4 weeks ago, I was greeted with this screen. 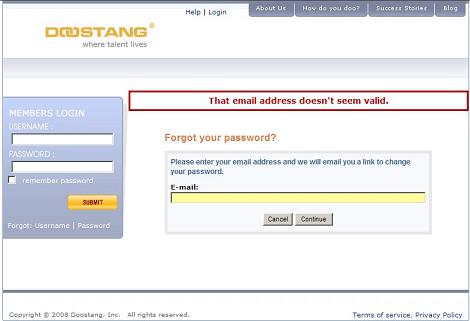 I waited two days thinking it was a cookie or cache issue or software issue at their end. Nothing. Then I wrote to one of the founders, an address I had from helping a friend with an earlier issue.
I said . . .

Hi Mareza,
For two days now and no apparent reason, Doostang no longer recognizes me.
My user name and password don’t work and my email is not recognized.

I find this a serious problem. Can you help me resolve it?

After sending it a second time, I got this reply:

Forwarded it along thanks. Not much more I can do from here.

I wrote a comment on this post at the Doostang blog on February 28th — it’s still in moderation. You can see it there.

Nothing’s changed.
___________
UPDATE: ONE THING HAS CHANGED. They took down the post on which I commented. Someone from Doostang also visited my Linked in profile. Still no one attempted to contact me about this matter.
__________

They have my contacts. I apologize to my friends to whom I sent invitations. I hope that your experience is better than mine.