On a hot, spring day in May when I was teaching first grade, an acute classic migraine hit me smack between the eyes. I’d lived with the symptoms and studied the condition since I got the first one in grade school, I knew the causes and the effects of this cousin to epilepsy.

This nerve storm would be an award winner. The “aura” — the quiet before the migraine storm — came on with an intensity that signaled that the pain would be following on fast and furious. It also meant that I might lose the feeling my hands or start “wixing my merds,” which wouldn’t be good in this class of 36 six-year-olds who had my number.

So while the kids were doing their math, I made a sign, set it on my desk, facing the class. It said I had gone on vacation. 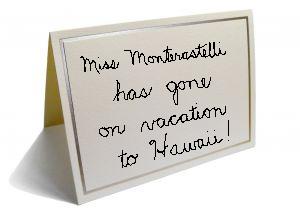 Then I sat at my desk writing a letter to a friend about how the situation sucked.

A first-grader much like Carol Roth (@caroljsroth) came up to my desk to ask a question. I acted invisible and kept writing, as if we were on two different points in the time-space continuum.

She picked up the sign and read it to the class, “Miss Monterastelli has gone on vacation to Hawaii.” She put the sign back on the desk with some authority.

A voice from a Chris Brogan (@chrisbrogan sort of young man said, “Hey, that means we don’t have to do our work!”

Then a voice from a Amber Naslund (@AmberCadabra sort of young lady said, “Yeah but if we did that, when she gets back, she’d give us THAT look.”

So they went on with their work and I waited for my migraine medication to take effect so that I could get back to my class and back to our work.

When a Tire Goes Flat in Front of the Audience, Stop Driving

I was at presentation a while ago. The speaker was someone I’d looked forward to hearing. She not only knows her subject matter, but comes high recommended as someone who can keep an audience engaged.

As the presentation got rolling, it became apparent that she had built her presentation for a different audience. The slides were over-packed with information that didn’t apply to the people in the room. It also seemed that she had realized that too, because as she spoke her confidence waned.

She didn’t have the option of putting up a sign and building a new presentation, but she might have untangled the situation by stepping back and starting over just the same.

If only she’d stopped, stepped back, and said, “You know this is not working, let me try something else. I’m going to close my computer and start over with a few questions from you.”

The audience would have thought her a hero for saving them an hour of time wasted. The humanity and courage of setting aside her plan for them would have said volumes about her respect. What had gone haywire could have been a super win.

Instead, despite her own discomfort, the speaker chose to plow through to the end with the presentation that didn’t work.

When a tire goes flat, it’s a bad idea to keep driving. The same principle works here. If you know that what you’re doing isn’t working, stop, step back, and start over in a new way.

It’s not the plan that counts it’s the quality delivery to the audience.

Whether we’re telling, helping, or selling, sometimes we can misjudge where our heads are or what the audience needs. We can often feel it by the lack of feedback in the room. It never hurts to ask, if the group wants or needs to go another direction.
They’ll make you a hero for making it about them.

And about those first graders …

After about a half hour, I felt much better and took down the sign sign. Luckily I had been to Hawaii, because I was greeted with a long list of questions about what I’d done and seen while I was on vacation there.

Do you have a story about plowing on when you should have stopped or starting over and being glad you did?

Everyone Gets the Same 24 Hours

You don’t need to get a life, you’ve already got one.

Life — it’s what we do between the time we get here and when we go. We only get one, and despite what other folks might suppose, it’s ours to determine what to do with it.

What do you think of when you read this sentence?

It was the time of my life.

We don’t say that often enough.
What would it take for you to live life saying that?
Isn’t that idea the how to happiness?

Life either happens to us, or we take hold of life and live it.
Here are the top 10 ways to get a life and start living it.

2. Define what living means to you. It’s not as hard as it sounds. Just picture yourself at the end of your life looking back. What words would you want to describe how you lived your life and who you are as a person?

3. Stop living in the future. Every time you think “someday” or “when I have time I will,” stop. Ask yourself, “Why not now?” Think about this sentence, “I always wanted to, but never did.” Start doing the things you always planned to do. Choose to start a new life every morning. Plan one thing you will do today to feel alive.

4. Surround yourself with people who enjoy living. They’ve obviously discovered how to have a life and live it. Why not hang with the pros?

5. Lay down your pain and your anger. Carrying them around makes living harder and less fun. It doesn’t bring anything, and it steals a lot. Choosing what fuels you is how you start over in life.

6. Let the losers win. Don’t argue about things that you don’t care about. Unless there’s some real threat, let the folks who have something to prove, prove what they need to. Why waste your living time trying to fix what’s wrong with them?

7. Create energy. Jump to forgiveness and love, then figure things out. Most conclusions we jump to are not only wrong, they’re negative. Negative conclusions lead us to prepare a defense. Being on the defensive isn’t living. It’s hiding from life.

8. Learn the physical symptoms of when your head and heart become disconnected. We know when we’re having a knee jerk reaction, when we’re feeling sorry for ourselves, and when we’re being blind to people’s feelings. We can remember how it felt physically while we were behaving badly. Get to know those symptoms, and you can stop the behavior. Living life will feel a whole lot safer because you won’t be in danger of shooting yourself in the foot.

9. Take small risks that push your boundaries in every way. The joy of life is packed in learning that matches our skill set. When we stretch just a bit intellectually, physically, emotionally, we grow. Living is growing. Even your cells know that.

10. Value and protect the people and the places you care about. A job isn’t a life. It’s just a part of one. Let the people you care about come first, and let everyone know that you do. Re-read numbers 1 and 2.

We come into life with whatever we’ve got. It’s ours to do with. It took me a while to figure that out — that my life isn’t just what happens to me, that I could take hold of it. I choose to live life saying that …

I have the time of my life.

You’ve already got a life too. Are you living it?

Be irresistible.
–ME “Liz” Strauss