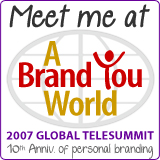 No doubt that Phil was fun last night at Open Comments. The man has an imaginative brain. Put that same brain to work on a problem or an idea, and you’ll find he has exciting and profound things to say. You’ll get your chance tomorrow in a teleseminar that’s part of A Brand You World, the celebration of the 10th Year of Personal Branding.

Phil’s speaking on line 2 at 6pm ET/11pm UK — his topic is Identity You: Creating a Personal 5×5 Branding Strategy.

So tune in. Those of us who heard Phil’s keynote at SOBCon07 know the high value of listening in when Phil is speaking.

The A Brand You World teleseminar schedule lasts 12 hours with two parallel tracks. The list of SOBs on the venue include:

Listen in. Finding an answer you’ve been searching for is winning. Hearing someone say a truth you know is inspiring. How can you lose?

Anita Bruzzese let me know today about something that took my attention immediately. People who invested their lives on our behalf are home and without jobs. Here’ some of what Anita has to say on her blog.

I recently spent nearly an hour talking to Caulfield, an articulate, passionate and committed guy who gave me a real earful about the pitiful state of affairs regarding employment for our veterans. Despite having served with honor and serving in some of the most dangerous parts of the world, these vets have a tougher time than other job seekers looking for work â€“ those age 20-24 often have an unemployment rate two to three times higher than non-veterans of the same age group.

Pleast read more of Anita’s story on vets without civilian jobs. Then visit Hire a Hero and pass on the information to folks who can help.

It’s a fine way to spend a Saturday visiting some B. A. D. Bloggers I know. Without hesitation, these are folks who are worth getting to know. I can say that because I did.

Have you met HART Singer yet?

HART’s mind works in mysterious ways. HART’s been around Successful-Blog longer than I have. He’s the man who said the now famous quote, Half the show is in the comments . . . to Paul Scrivens when Successful Blog had no comment feed. That was over 39,000 comments ago in November of 2005.

HART’s an entertaining storyteller and he’s got some entertaining stories to tell. Believe that. Few are about his work serving businesses as a finance man. HART doesn’t show off. His stories are about times when real-life things happened — the wheel flew off the car and went through the window of the biker bar. . . . or this one about why he was fired.

HARTs also Canadian citizen, who let me in on the secret that all Canadians know everyone, everywhere in the world, and that he is related personally to almost half of them.

When you see HART let him know that you’ve seen the bar stool with his name at Successful-Blog.

Oh and, do you know Anita Bruzzese?

Anita is from Missouri, and she has 45 Things to show you about the things that you do that drive your boss crazy.

You might wonder how a writer living in the “Show Me” state would know anything about what your boss thinks or what you do. I sort of wondered too — until I found out that she’s spent the last decade writing about the workplace for Gannett News Service and USAToday.com, winning awards and such. They say her readership is over 8 million daily. ahem.

Anita is plain fun to talk to. We covered the topics in her book, a few places we’d been, and some things we’d seen, The best part hands down is that she’s a delightful and charming conversationalist, who on that day was as sincerely interested in another person’s new book as much as she was in her own. No kidding.

By the way, if you meet her, her last name is pronounced Ã¢â¬ÅBrew-ZEES.Ã¢â¬Â

A Woman Who Knows Your Boss 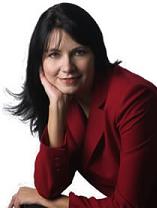 I met Anita Bruzzese via email quite a few weeks ago. Then about two weeks before SOBCon, we had a wonderful conversation via telephone about her book and her job as a nationally syndicated workplace columnist for Gannett News Service and USAToday.com. Anita has been writing her column for about 15 years, with a readership of more than 8 million. She also blogs at AnitaBruzzese.com. Recently, she wrote her second book, 45 Things You Do That Drive Your Boss Crazy–And How to Avoid Them

Anita, how did you get started writing about workplace issues?

I had been the managing editor of a magazine on employee benefits, and that exposed me to a lot of workplace issues. Then, when I had my first child, I decided to start freelancing from home and looked into writing about the workplace for a general interest audience. It was interesting because when I first proposed it to several newspaper syndicates they werenÃ¢â¬â ¢t interested, saying that they already had finance columns. They just didnÃ¢â¬â ¢t get it. The workplace had changed and people needed information to manage their own careers. It wasnÃ¢â¬â ¢t just about money Ã¢â¬â it was about the problems with co-workers and bosses and the strategies people needed to get a raise or get a promotion.

I had worked for USA Today, so the company that owns it, Gannett, knew me and decided to begin distributing the column nationwide. I sort of held my breath the first week, not knowing what the reaction would be. Then, the mail started coming in, and I knew that I was on the right track. All these people were writing me saying, Ã¢â¬ÅI thought I was the only one going through this at work..Ã¢â¬Â They now felt they had someone (me) out there helping them.

In that respect, it really was like blogging. I wrote about an issue, and people just jumped on it, responding with situations they were going through, looking for more information. I spent a lot of time in those early years responding to reader letters Ã¢â¬â that was before the Internet and e-mail, and people didnÃ¢â¬â ¢t have any idea where to go for more resources. Now, with blogging, you get that instant community and that instant access to information.

Your book certainly has an interesting title. How is it different from the other career books out there?

IÃ¢â¬â ¢m a journalist. That means IÃ¢â¬â ¢m not promoting a specific product or method that will get you ahead at work. IÃ¢â¬â ¢ve always said thereÃ¢â¬â ¢s no holy grail of workplace advice, and I am constantly looking for sources of information that will help people at work. To me, information is power. If I give that information to readers, then IÃ¢â¬â ¢ve given them the keys to their own success.

At the same time, I kept getting these letters from readers that showed me they werenÃ¢â¬â ¢t always getting it. They were making the same mistakes over and over, so that got me to thinking that perhaps I needed to not only put all this information in one place, but I needed to tell them WHY the boss cared whether they talked on their personal cell phone too much, gossiped or failed to write things down. It was, simply, the stuff that was driving bosses crazy.

So, why does the boss care?

ItÃ¢â¬â ¢s pretty simple, really. He or she cares because what you do affects his or her job. ItÃ¢â¬â ¢s always about the bottom line. Anything you do that adversely affects the bossÃ¢â¬â ¢s ability to get ahead, to look good in front of his boss or to contribute to the companyÃ¢â¬â ¢s bottom line is going to get you on the bossÃ¢â¬â ¢s radar screen in a bad way. And thatÃ¢â¬â ¢s something you want to avoid, because once he or she notices something youÃ¢â¬â ¢re doing wrong Ã¢â¬â like wearing the wrong thing to work Ã¢â¬â then the boss says, Ã¢â¬ÅHmmmÃ¢â¬Â¦What else is this person doing wrong?Ã¢â¬Â And then the boss starts watching you closely to catch you screwing up something else. ThatÃ¢â¬â ¢s never a good thing.

What are some of the most common mistakes people make at work?

I think the most common errors people make have to do with communication. Despite having technology at our fingertips, sometimes it gets in the way of common sense. DonÃ¢â¬â ¢t put anything in an e-mail at work that you wouldnÃ¢â¬â ¢t mind 12 lawyers seeing. DonÃ¢â¬â ¢t blog nasty things about your company or your boss. DonÃ¢â¬â ¢t gossip because itÃ¢â¬â ¢s demoralizing and immature. Make sure you know how your boss best likes to be communicated with and how often. ItÃ¢â¬â ¢s also a good idea to keep your language clean and your jokes cleaner, because co-workers who get offended can end up complaining about you to the boss.

I think a lot of people feel trapped in their jobs. They find themselves in these difficult situations, and they donÃ¢â¬â ¢t think they have any power to do anything about it. IÃ¢â¬â ¢d never be comfortable thinking IÃ¢â¬â ¢ve got all the answers, so thatÃ¢â¬â ¢s why I try to continually interview other people and offer readers the best information out there. I tell people not to get discouraged Ã¢â¬â there are so many people out there willing to offer good advice and help, and you really do have the power to make your career what you want it to be.

Thanks, Anita. It’s always fun talking to you. Your book would have served me well — both when I was a boss and when I had one. It’s a pleasure to see that you have put this information where real people can use it.

Good luck on your May 27th appearance on the Today Show!!