A friend emailed me asking if I would pass along information about a product just coming out. The email was a sale pitch I could pick up and pass on. The rest of the message was over the top for me — kind of pushy and kind of “wink, wink, nudge, nudge — you help me and I’ll help you later.”

I didn’t find that compelling. What I found was a way to say, “I’m sorry, not this one.”

It takes time to build a network. No one wants to abuse theirs, but wasn’t investment partly for support when we need it? What’s the right way to enlist the support of the people we call our colleagues?

In his blog post, War Paint and Promotion, Todd Jordan offers these words of wisdom . . .

ItÃ¢â¬â ¢s partially about having something great to say, but itÃ¢â¬â ¢s equally about sharing your story and making them a part of it.

Keep them as you read through these.

0. Seed the garden. As Dave Navarro said, ” . . . Spend time either a) getting *their* name out or b) helping them move forward on their site goals … well before you need promo.” via Twitter.

1. Offer something worth sharing. Sure I love you, but if your product is bad or boring. I’m going to find it hard to pass it on to the other friends in my network. < 2. Show confidence and courtesy. If you get nervous, self-conscious, or overly humorous, It makes it seem like your products can’t stand on its own.

3. Let me opt in! Tell me about what you have in a way that leaves me lots of room to choose for myself. If you hang your promotion on our relationship, you might find that our relationship wasn’t strong enough to carry it.

4. Make it easy to talk about you — have a simple message. You can offer me the way to say what your point is, but don’t give me a speech.

5. Give me a way to feel proud. I’m going to be sharing your message with other folks I care about.

We Write About Others

Reputation is an online currency. The value of what we say is nothing without credibility, competence, and integrity to back it up. Part and parcel of online reputation has become something known as social proof. The popularity of our network and the things people say about us and our influence carry weight that affects the value of our words.

But what if people say things that are mistaken, out of context, or just made up? Even with the best intentions, folks meaning to evaluate and offer input can miss part of the story. And there’s that human trait some folks have for wanting to take down whatever person is currently at the top.

How do we tell a critic from someone who simply wants an influence to shut up?

Last night in a conversation on Twitter, the subject of critics and criticism came up.

This morning I went to Merriam Webster for clarification.

critic – Etymology: Latin criticus, from Greek kritikos, from kritikos able to discern or judge, from krinein
Date: 1588
1 a: one who expresses a reasoned opinion on any matter especially involving a judgment of its value, truth, righteousness, beauty, or technique

censor Etymology: Latin, Roman magistrate, from censÃ âre to give as one’s opinion, assess; perhaps akin to Sanskrit ÃâºamÃâ¡sati he praises
Date: 1526
1: a person who supervises conduct and morals: as a: an official who examines materials (as publications or films) for objectionable matter

A critic analyzes a work to determine whether it’s structurally sound and accurate. He or she sees whether it’s aesthetically pleasing within the confines of the medium it’s offered. A critic uses education and experience to evaluate whether an artist, thinker, writer, speaker or other has set out to perform a worthwhile work and has accomplished that goal.

A critic’s personal opinion of a work or the source is secondary to how well the execution of the original purpose is achieved within confines of the validity, accuracy, structure, and expression of the work.

Statements about the “goodness, morality, or personal value” of a venture or adventure are not criticism in it’s truest nature. Unsupported personal judgment about a work has to pack unquestioned expertise to be criticism and even then —

Censors judge goodness, morality, and what is right . . . or not.

It’s a delicate endeavor to do that fairly without taking away a person’s humanity and in the process losing our own. The most effective censors also leave their personal biases at home.

A person is a person, a many dimensional being — not simply a blogger, an A-Lister, a social media guy, a date last night, or a mom. I think about that when I hear folks make statements about motivations and intentions without having heard from or studied the people they are talking about.

According to the Etymology, the word critic is younger than the word censor. Maybe we need more practice.

Critics and censors — what do you see of them? How do you respond?

It’s not unusual to speak of corporate or organizational culture. I’ve been thinking how that idea applies to the living web, to social networking in particular. We are building the web and the web cultures each day as we build our relationships.

Culture is made up of the values, beliefs, underlying assumptions, attitudes, and behaviors shared by a group of people. Culture is the behavior that results when a group arrives at a set of – generally unspoken and unwritten – rules for working together. Susan Heathfield

The chart below shows the cultures that result from the environmental needs and strategic focus of the people who form them. The four cultures described form around internal or external focus and the need for flexibility or stability. 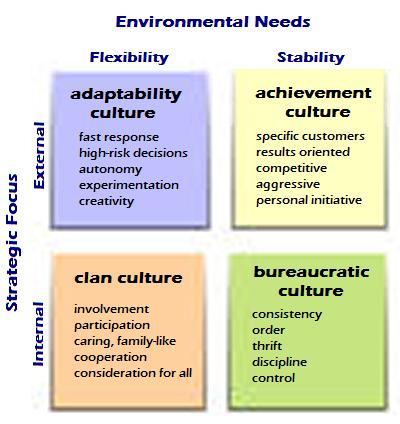 Where would you put social networking on this chart?

Are You Adaptable or Have You Joined a Clan?

Though stability might be a goal of the web culture, few would argue that we’ve reached it. Flexibility seems a given in order to survive as we build out this dynamic environment. That puts us firmly in the two cultures on the left of the chart above — the adaptability culture and the clan culture.

The Adaptability Culture is outward facing. The focus in this group is on serving all of their stakeholders, especially customers and people who offer new ideas. This culture welcomes risk that leads to growth. People of an adaptive care deeply about people create value and processes that lead to positive change. This culture can move quickly, innovate, and rewards creativity.

The Clan Culture is inward facing. The focus is on serving those who are a part of the clan. The purpose of participation and involvement are to meet changing needs from the environment. This culture places high value on cooperation and consideration for all stakeholders. Status differences are minimized. Treating others well is rewarded. This culture moves to support the group’s needs.

Will Plurk’s Karma destine it to grow into a clan?

All four cultures have validity and success stories behind them. The object is to match the values, the people, and the environment. Personally, I want to stay fimly footed in the blue square, visiting the others as I might have the need.

Consider the social networks you know. Are they adaptability cultures or are they clans?

–ME “Liz” Strauss
Work with Liz!!
[Chart based on Toward a Theory of Organizational Culture and Effectiveness by Denison and Mishra via Understanding Management by Daft and Marcic]

Buy the ebook to get your voice in the conversation!

Packed with Facts and Calls to Action

If you’ve been looking for the way to explain social networking and social media to someone who’s just getting interested. This should do the trick.

It’s a slideshare made by Marta Kagan, an online marketing, e-mail marketing, direct mail marketing — the list goes on — for this self-described “bonafide marketing genius.” This presentation is proof that she’s not just throwing out some title there.

| View | Upload your own

Buy the Insider’s Guide and get your best voice in the conversation.

The Wisdom of Crowds

Yet the names we choose can limit our thinking as much as they shape it.

All of those words refer to people. Individuals grouped together as a crowd.

The wisdom crowds is the aggregate of independent decisions by the individuals who form the crowds. To get the whole story when we listen, we need to the group, but we also need to listen one at a time.

Gathering Wisdom One at a Time

To get the rich context and detail, we have to listen to individuals talking â€” not a whole group shouting. Every person has a different story. In those stories are the reasons people care; why tell their friends about us or move on by. Individual views and experiences put the heart in the data.

To listen actively, picture the person and the experience, and consider questions like these . . .

You get the idea. If we hear — really hear — individual stories, we can sort to find the universal truths we share.

Would you tell me a listening story that you’re thinking of right now?

–ME “Liz” Strauss
Work with Liz!!
Buy the ebook. Be sure the message you send is the one received.

When I was a kid, I wasn’t looking for my direction. No one said to follow my passion. I was a kid. I was on a quest to do extraordinary stuff.

When I was a kid, I wasn’t bombarded with information from every dimension. My social circle was small. The proportions between my size and that circle have changed since then. My life is replete with relationships and complex connections. Now I have more social network passwords than the number of friends I had when I was kid.

Conversations bifurcate, trifurcate, and splinter off in bit and pieces. They move like a soccer ball on this field where I hang out. I’m following echoes down weblike trails of plurkshops and twebinars to hear what my friends are saying now.

Underneath all that, the kid I was still has dreams, still wants to do extraordinary stuff. Here’s my recipe for getting back to what I’m about.

In a minute or so, I remember my quest.

Passion needs direction, or it gets lost.

How do you hold onto your true direction?

–ME “Liz” Strauss
Work with Liz!!
Buy the ebook and find out the secret.