It came to us while walking on the beach last week. 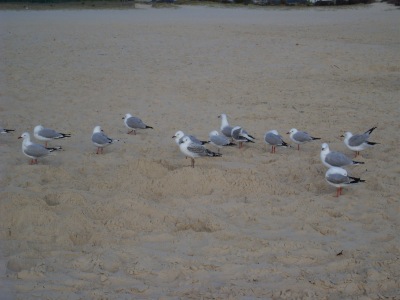 You know how, what with Facebook and Twitter and Plurk and all the other social networking communities we all have these hundreds or thousands of friends online? Well, what if we were to friend some of those people we see offline?

That’s right, friends we can talk to, hang out with, but without having a keyboard or microphone or videocam to help us communicate!

What triggered this particular brainwave, which we are currently seeking to trademark as “Friends in the Flesh”, was when, as we say, we were walking on the beach.

Now just by way of background, when we walk on the beach early in the morning there are several people we see most days. Some form of greeting or acknowledgement is exchanged, ranging from a hearty “Good Morning! Beautiful day!”, through to a friendly but fairly emotionless nod. You always know who the visitors holidaying from the city are: if you say “Good morning!” they look at you nervously and might manage a smile but you know their city reflexes have them suddenly in fight or flight mode.

Anyhow, the other day, a chap we’ve actually chatted with a few times and another who has been in the “nod or make a small, unostentatious sort of waving motion with the hand” category of morning beachgoers, stopped us to actually introduce themselves by name and discover our names.

We discovered we like this and now we are on a bit of a campaign to get to know the names of the other regulars.

Who knows where this could lead? The League of Offline Friends perhaps? With a list, in – what do they call it – a printed book?

Given the instantaneousness of friending on Facebook and following/being followed on Twitter, the four years or so it has taken for us to know the names of people we greet every day and have them know our names, and even stop for the occasional chat, seems – no, is – an extraordinary amount of time.

Is it possible, while we build amazing and multitudinous friendships online, that we are neglecting – literally walking past – opportunities for friendships in our offline lives?

What if 2009 were to be a year when we did some serious offline friending? Going beyond the wave or the non-committal half-smile exchange with people we see every day or regularly but really know nothing about to exchanging names and even having a chat or two.

A chat offline? You mean it’s ok to do that? Cool.

Do you have a story to tell about going from a “courtesy” wave or nod to actually friending someone offline? Care to share, here?

Suzie Cheel and Des Walsh wishing everyone an wonderful friendful 2009.

At Kirra beach, near where we live, there is a new landmark, the multi-storey Kirra Surf apartment building, the latest manifestation of local retailing icon of the same name.

Its history is closely linked with that of another local retailing icon, internationally famous surfwear label Billabong.

Thirty-five years ago, in 1973, Kirra Surf did not exist and Billabong was just getting started.

The now very wealthy founder of Kirra Surf, Peter Turner, tells with some amusment the story of meeting for the first time the now also very wealthy Gordon Merchant, founder of Billabong.

Turner was working in a local surf shop, now long closed, and as he says, a young guy had walked into the shop trying to convince them to stock a new pair of board shorts Ã or ÃboardiesÃ as we call them here. The young guy was Gordon Merchant, , then eking out some income from what was basically a two person operation, himself and his wife. Merchant was selling surfboards and swimwear out of his station wagon.

As Turner tells it, Merchant “came in with three new pairs of boardies that he wanted us to stock.”

One story, one young man with a big dream inspiring another, two multi-millionaires.

Do you have a dream youâve been putting off
till itâs a good time to start?

And if you share your dream and your decision here,
then someone can tell your story years from now. Suzie Cheel and Des Walsh wishing everyone an abundant 2009

Thank You for Coming!

They act as if time is marching all over them, with each year ticking off their lives with a resounding effect. People stomp through their lives, never stopping to celebrate milestones, small victories, and everyday achievements. —Alicia

Celebrations. Birthday parties. Anniversaries. Graduations. Marriages. New Houses. New Babies. Openings and Closings. And the dates that remember them. In the timeline of a lifetime, it’s not hard to start seeing them as interruptions and burdens.

Wouldn’t our calendars be so much freer without all of those ritual obligations?

Last Tuesday and today, I was reminded why we stop what we’re doing to take part in those “interruptions.”

It’s the stopping and the gathering that holds together a community. We see each other. We see who’s here and who’s gone missing. We tell stories of our history. We remember what we used to be and notice how we’ve grown.

In an event tied to last year, we notice this point compared to that one. We see what we’ve given and what we’ve managed. We reunite with people we didn’t know we’d thought we had lost, and in some ways they bring back parts of our personal history.

Thank you to everyone who stopped by to celebrate and mark this day for next year’s celebration. Meanwhile, here’s some of what happened at this one!

At This Year’s Party

We had a refreshments.
emdoozie | Michael Anderson said, “Cocktail anyone?” and Bean brought the party hats.
Katie Baird was kind enough to provide the Atomic Cake. and Martin Neumann won a copy of DivaJess’s ebook The Indispensable Guide To Living & Working From Anywhere You Want

REVIEWS were good. I particularly liked this one that came in while the party was still in progress.

well, HELLO everyone! look at all these people! and the balloons and the party hats and the BAND! where did you get that band, liz? and i LOVE your dress. you look even better than last time i saw you, how do you do that?

and Giovanna Garcia left, but returned with a video birthday I-Action wish . . .

Joe of course, wrote his traditional road side poem.

Everyone brought a present tonight
Links, successful to everyones delight

We all hope that there are many more years
Of Blogs Successful, Liz leading, smiling, no tears.

Everyone contributed photos, articles, and stories for us to celebrate and to mark this place in our mutual history.

Here are the links you brought:

Thank you, everyone, for being part of Successful-Blog history.

Today’s beach notes has a new twist:
Idea and image by Suzie and the verse by Des Walsh 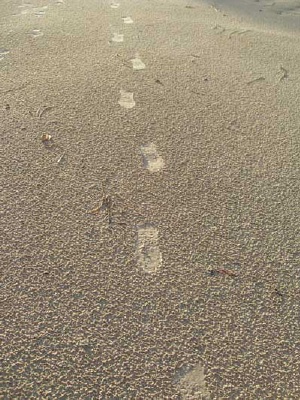 Yesterday as we were walking on the beach, earlier than usual I saw this perfect line of single footsteps and thought that would be great for beach notes. I sometimes get impatient taking one step at a time. As Des says ” You are not a kangaroo”!

Des then penned these words:

To go one step at a time

We try too often

To rush the process

When will we learn?

I know when I take one step and follow through things flow. I am learning:)

I was walking on the beach this morning thinking about what I would write for my first post on Successful Blog. Liz and I have been talking for a few months now about my doing a regular post from Down Under.

I came up with Beach Notes, Liz said : “like messages in a bottle.”

Today as I asked Des (my life and business partner) what I might write, the words getting out of your comfort zone, came.

Interesting I thought as last week I put My Big Hairy Audacious Goal to the world and yesterday really stepped out of my comfort zone with the launch of a new blog where I have asked for help from my readers. So how am I feeling about this today, scarred but excited, the adrenalin is flowing and I feel finally I am moving forward. Getting out of the groove is looking very positive.

I wasn’t even distressed when the blog wasn’t flooded with comments or link love. In the past that would have been so discouraging. I am growing 🙂

I then thought about other times in my life when I have stepped out of my comfort zone and it has been life changing.

This time I feel will be life changing and will enable me to  make a difference to my life, the lives of others and empower people to live lives full of joy, freedom and creativity.

Do you like stepping out of you comfort zone? How does it make you feel?

See you next week with another note from the beach.