Sometimes I meet Liz – in the city, or on Twitter – to talk about not talking about social media.

“I think I talk more about the muppets,” she responded.

I giggled a little as I wrote back, “This is you.” And I linked to this video:

She proudly retweeted. Because this is who we are. And this is what we do.

We go around and around, thinking up ways to change the world by connecting with it. Talking, walking, sometimes getting tired…

I don’t know much about social media.
I know more about cookies.

Since I was a kid I’ve had a delicious talent for intuitively choosing the best cookie in the jar. And as a kid, if you were my friend and I only had one cookie, I’d always give you the bigger half. I like to think that’s the most valuable thing Liz and I have in common. (I mean, who needs tools when you’ve got COOKIES? Ahem.)

Liz once told me, “Every star shines — brilliance is relative.”

I don’t remember why she told me that, except that that’s who she is. Her heart is always golden. Even in the moments I have no idea what she’s talking about, I trust her with all my heart because I know she would never let me fall.

We don’t have to talk about social media to teach social media. But to learn it, we’ve got to live it.

So when Liz asked me, “While I’m at WordCamp Las Vegas, will you hijack my blog? Maybe you could write five things people don’t know about me, like I wrote 5 Tips about Surviving on the Road with Lorelle that one time?”

… I knew I probably know just this one:

I’d rather learn the Muppet Metaphors of Social Media than bang my head against the wall studying the Cruel Calculus of Communicating Online.

What has Liz taught YOU?

Or, um, who’s your favorite muppet and why?

Life is a never-ending series of choices and decisions. Do I get up now or wait another minute? Do I sign this contract or hope for a better offer? Do I buy a new desk or upgrade my computer?

Some choices are fun . . . Where do I take my friends when they come to visit?
Some decisions are not so . . . Do I uproot my family or give up the great job in another city?

The fun ones speed up our thinking with endless possibilities. The not so fun ones mire us in thoughts of dead-end alleys. Sometimes, we forget that we have options about how we consider and respond to choices and decisions.

The Dilemma of Logic and Emotion

It’s almost impossible to find a child who doesn’t like to solve a puzzle or a riddle. Children usually find choices fun too — when the choices are simple or they can choose again. Decisions are a little trickier, because decisions cut off other options. Most adults don’t like big decisions any more than children do.

It’s the cutting off other options that often finds us in a dilemma. No answer seems the right one. Or worse, no answer even looks a glimmer better than another.

Our brains are made to sort information, make choices, and come to decisions. No decision is particularly frightful when we face it with raw logic. But logic alone omits a good part of what makes us human. We need our hearts and our personal goals to get to a grounded, well-rounded decision.

The issue is that our logic can be at odds with our intuition and emotion.

How to Have Positivity and Confidence Making Tough Decisions

A great decision is made from what we bring to the situation. We can’t change our views in response to every decision, but we can check our own and other folks’ views. If we open ourselves to test our thinking, a tough decision process can be one of positivity and confidence. Try approaching your next tough call in these ways. 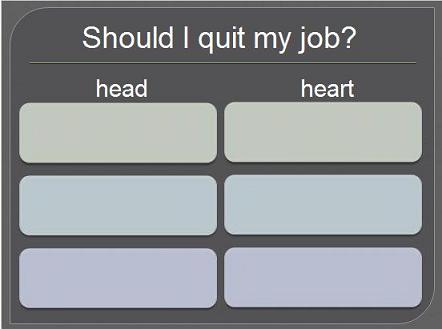 These approaches to tough decisions help us stand outside our thinking. In the chart of Logic and Emotion, we weigh our head and heart, but we also see our intuitive or experiential bias. Revealing that subconscious bias can help us sort more quickly than the information on the list itself. When we consult our Internal Board of Directors, we open our minds to new ideas and new views.

Those new ideas and new views offer a wealth of contingencies and possibilities. The decision made from them will be grounded and well-thought. We can move forward with positive confidence about what we’ll do.

How do you get through tough decisions with confidence?

–ME “Liz” Strauss
Need help sorting decisions? Click on the Work with Liz!! page in the sidebar.
SOBCon08 is May 2,3,4 in Chicago. All that expertise in one room! Register now!

Yesterday, I talked about

How to Play Follow the Leader to Kick Start Your Brain

They encourage us to do our own thinking. Here’s the criteria used to choose 18 Thought Leaders and links to their blogs and blog posts to demonstrate what I’m saying.

Follow the folks who are curious and curious about you.

Follow the folks who are jazzed about what they do.

Follow the folks who know where they are going.

Follow the folks who’ve made it and are still there.

The number of leaders on our doorstep is unimaginable. We could be inspired every minute.

Think of the leaders you recommend. What qualities do you use to choose who you follow?

Related
I Have an Idea â€” I Have Lots of Them!
Donâ€™t Hunt IDEAS â€” Be an Idea Magnet 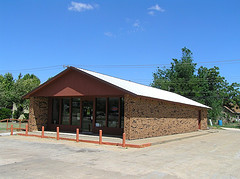 And, whatever else comes up, including THE EVER POPULAR, Basil the code-writing donkey.

Yes the Mic Will Be on Tonight
Becky McCray Will Be Our Guest Host!

We can talk about beer, wine, whiskey, scotch, cognac, brandy, bars, saloons, taverns, liquor stores in Oklahoma, and whatever else comes up.

The History of Blogging!

Here’s a few ideas to get us started:

And, whatever else comes up, including THE EVER POPULAR, Basil the code-writing donkey.

Oh, and bring links about the history of blogging to share!