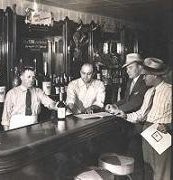 I grew up hearing fiercely loyal customers tell stories about my dad. Other such stories I lived myself …

I was about 20 years old, home from college for the weekend. I stopped by the saloon to see my dad. All the guys were razzing him saying things like, “Close the cash register, the Boss is in town.” I was grinning back, “A smile from my dad is all I’m after.”

Some guy from Detroit swaggered in like this was any old bar, and he was some hot stuff. The big spender sat down and ordered a 50-cent, 8 oz. draft beer. He chose the red stool to Jim G, a guy about my age, who saw my dad as his surrogate father.

I had just thanked Jim G 83 times for fixing the flat tire on my boyfriend’s car — he’d driven out 17 miles to help me when I was stranded on route 80. We met for the first time by the side of that highway just 18 hours earlier.

I didn’t notice the Detroit stranger order his beer. I never served drinks there. Everyone knew my dad didn’t want me to. By the time the guy got it, I was teasing my dad and talking to a Joey D. He was an old guy who knew me since I was still sitting on the bar with my feet hanging.

Next thing you know, Mr. Detroit threw a fist in Jim G’s face. They were having it out right there in seconds. My sixty-something dad flew over the bar, pulled the guys apart, and handed them over to a couple of friends. Then, as a deputy of the county, he called the cops to pick up Mr. Detroit for visit to the local jail.

It was then that I heard the story. Mr. Detroit had asked Jim for my name. Jim said, “I told him ‘You wanna know, ask her or ask her father.’ I wasn’t going to tell him if you didn’t want him to know.”

Later that night, my dad bailed Detroit out of jail, took him to breakfast, and sent him on his way.

In a small town saloon, personal and business relationships can’t be separated. You throw guys in jail and you bail ’em later. You feed ’em and let ’em know you’ve been there.

My dad cared about the people who were his customers and so they cared about him. He looked out for them and they looked out for him. Investment made investment returned. It’s the ROI of relationships — in spades. For me, it was like church, family, and Mark Twain to be there. Lots of others felt the same way that Jim G and I did.

What makes you a fiercely loyal customer?

It can seem complicated to write for a readership that includes beginners to experts. I’ve done it for over two decades. It can seem like there’s too much to consider to meet them all at their own level.

My experience is that beginners and experts are not that different when they read. They might choose to read different things, but we all do. Beyond that difference of content, beginners, experts, and those of us in the middle — all readers — want the same things from a writer. END_OF_DOCUMENT_TOKEN_TO_BE_REPLACED

This is me. I’m Liz. I’m the nice one.
I love 9rules Network. This Not a critique of the blogs there.
I never imagined in a million years it would be taken as such.
I’m sorry it was mistaken for that.
My apologies. I am truly sorry if that was not clear..
It saddens me to think someone would mistake this as something like that.
I’m so very sorry to all of you and so embarassed.

So I set the record straight.
I loved 9rules and everyone I met there when I was member and I still do.
Paul Scrivens has only been good to me. I consider him a friend.
This piece was simply meant as study in how quicky readers can sometimes make decisions
That was all.
As my dad use to say, “Only believe 1/2 of what you see, and none of what you hear.”

A week ago the 9rules Network announced 111 new sites had been selected to join them. I had the interesting experience of going through the list of 111 domain names looking for the blogs of folks I knew. I learned a few things from that experience that I think are worth sharing.

UPDATE: It seems I need to update this. These are the response of a cursory look through a bunch of 111 blogs that I knew nothing about, except that within them there were a certain number I already knew well. I had a limited lime as I went through list to capture those that immediately grabbed my attention. This doesn’t mean those that didn’t have something wrong. I wasn’t judging a contest. I was supershopping as some customer on timed reconnaissance might do. There is no intended implication that the blogs I left behind have anything lacking. This is about 15 unnamed blogs I happend to pick up on my way through a list of 111 that were selected.

Think of these as observations from the field. Do what you will with them.

PS — I still like the ones I knew were great going in.